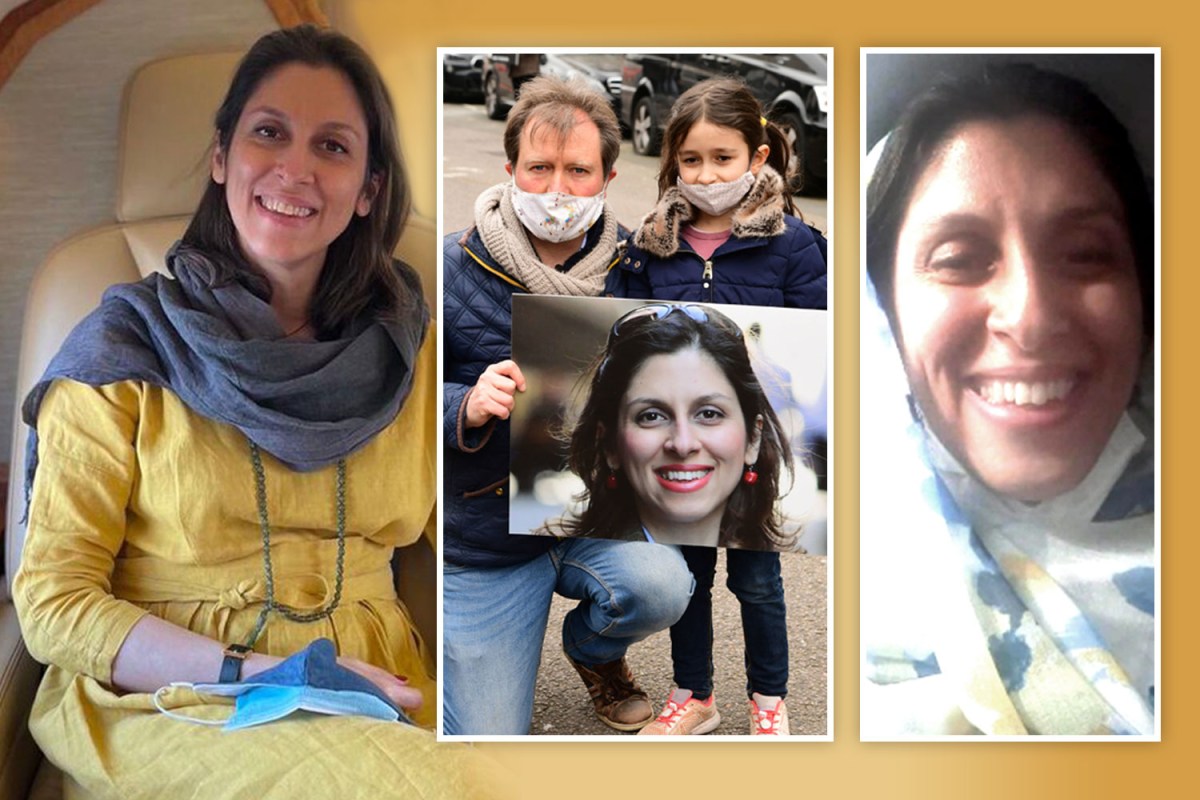 NAZANIN Zaghari-Ratcliffe flashed a beaming smile as she finally headed home to Britain after six hellish years as Iran’s prisoner.

The heart-warming first snap showed the London mum seated safely aboard her freedom flight after being released by Tehran today.

She will at last be reunited with devoted husband Richard and daughter Gabriella in Hampstead after Britain settled a £400million debt with Iran.

“Deeply grateful” Richard said the first thing Nazanin wanted was a cup of tea – and that he needed to tidy the house.

He said Gabriella had picked out which toys she wanted to take to the airport to see her mum.

And he added: “This has been a cruel experience in some ways but also an exposure to such a level of kindness and care from all walks of life.

“I think it is going to be the beginning of a new life, a normal life, and hopefully a happy family.”

Aid worker Nazanin, 44, was arrested in 2016 after a holiday visit with Gabriella and convicted of plotting to overthrow the government.

She was thrown in jail for five years and served another year under house arrest.

Her case was used by Iran as leverage in haggling over the debt Britain owed after cancelling an order from the Shah of Iran in the 1970s for 1,500 of our Chieftain tanks.

Boris Johnson this afternoon confirmed the debt has been settled, meaning she and another detained British-Iranian have been released.

He said: “I am very pleased to confirm that the unfair detention of Nazanin Zaghari-Ratcliffe and Anoosheh Ashoori in Iran has ended today, and they will now return to the UK.

“The UK has worked intensively to secure their release and I am delighted they will be reunited with their families and loved ones.”

He later paid “particular tribute to her husband Richard”, telling reporters in the Saudi capital Riyadh: “It is fantastic news that Nazanin is out.

“I am thrilled also for Anoosheh Ashoori and Morad Tahbaz who are also out.

“It is fantastic that she will be able to come back, see her family, see her daughter Gabriella.”

Nazanin and Anoosheh will fly to Oman before getting another plane back to the UK tonight.

She revealed she held two secret talks with her Iranian counterpart last month as a “final push to bring negotiations to a successful conclusion”.

Ms Truss said: “We have the deepest admiration for the resolve, courage and determination Nazanin, Anoosheh and Morad, and their families, have shown.

“They have faced hardship that no family should ever experience and this is a moment of great relief.”

Sharing the first picture, Labour MP Tulip Siddiq said: “It’s been 6 long years – and I can’t believe I can FINALLY share this photo.

“Nazanin is now in the air flying away from 6 years of hell in Iran. My heart goes out to Gabriella and Richard, as her long journey back home to them gets closer by the minute.”

Because Iran is subject to international sanctions Britain did not pay the debt with cash.

The Foreign Secretary did not reveal how exactly the debt was settled but said the funds “will be ring-fenced solely for the purchase of humanitarian goods”.

A breakthrough was reached yesterday when Iran handed back her passport and officials intensified talks for her release.

Piers Morgan tweeted this morning: “Thinking of this guy right now. What a day for him and his family, and what a remarkable campaign he fought for so long to ensure nobody forgot about his wife. Absolutely thrilled for you, Richard Ratcliffe.”

Sadiq Khan said: “I’m delighted to hear that Nazanin Zaghari-Ratcliffe is on her way home to be reunited with her family.

“Nazanin and her loved ones have shown great courage, strength and steadfastness through this unimaginably difficult time.

BBC presenter Joanna Gosling choked up with emotion as she announced the news live on TV.

Ms Siddiq praised Liz Truss as the only foreign secretary who “actually did something” to help Nazanin.

She said: “I’ve dealt with three prime ministers and five foreign secretaries, it’s finally when I came to a woman who was foreign secretary who actually did something.”

Nazanin’s family have been scarred by years of false hope after discussions to free her fell through.

Anoosheh Ashoori was also serving a four-year jail term in Tehran on spying charges, which he denies.

A timeline of Nazanin’s six years of hell

April 3 2016: Nazanin is detained at Tehran airport after a holiday visit to show Gabriella to her parents.

July 12 2016: Richard Ratcliffe goes to Downing St to press PM Theresa May on his wife’s 100th day in office.

September 9 2016: Nazanin is jailed for five years following for plotting to overthrow the government.

November 6 2017: Foreign Secretary Boris Johnson wrongly says Nazanin was “training journalists” when she was arrested. Iran weaponises his comments to claim she was spreading anti-regime propaganda.

November 15 2017: Richard says Nazanin has seen a medical specialist and is “on the verge of a nervous breakdown”.

August 23 2018: Nazanin is given temporary release from jail for three days.

March 28 2020: She is given temporary prison release but placed under house arrest.

March 7 2021: Her sentence is due to end – but she suddenly faces a new conviction.

March 15 2022: Iran hands back her passport and a talks for her release intensify

March 16 2022: Nazanin is finally freed and heads to Tehran airport