Latest UK NewsThe latest breaking news from the UK
Home Motors Buying Motors One of the earliest surviving E-types is going up for sale for...
Facebook
Twitter
Pinterest
WhatsApp 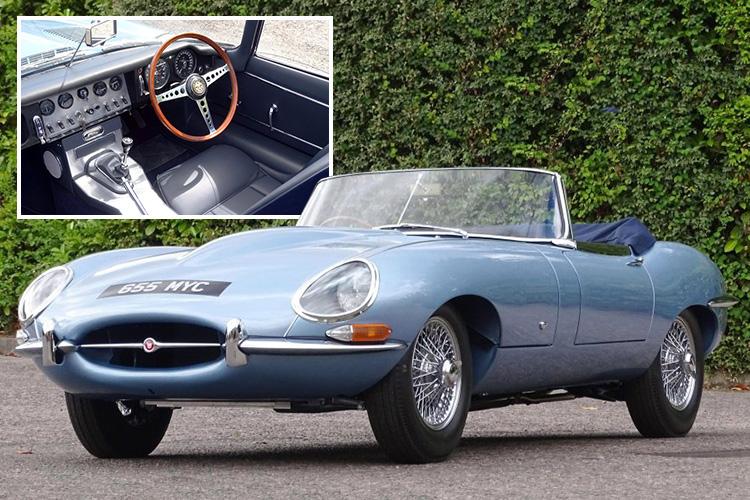 ONE of the oldest surviving E-types has emerged for sale at auction for a jaw-dropping £380,000.

The stunning convertible was one of just 92 to be built in its specification when Jaguar released the classic model in 1961.

It’s not known exactly how many of those survive today, but it’s thought to be significantly fewer than left the factory.

Of the 92 originally built, 18 models were given to VIPs including officials high up in Jaguar and enthusiasts who could race them.

Another 56 were sent to various specialist dealers, including this roadster.

Due to high demand for E-types are the country, the Jaguar has changed hands several times and has been the subject of multiple restorations.

The most recent saw the car returned to its former glory, with its original blue paintwork.

It’s also fitted with chrome trim, a navy blue folding roof and pristine wire wheels, along with an external bonnet lock, adding to its appeal among hardcore collectors.

It has a grey and blue interior and a perfectly kept 3.8-litre engine.

When Jaguar first released the E-type in March 1961, Enzo Ferrari described it as “the most beautiful car ever made”.

This early model is due to sell with H&H Classics, who have described it as “the E-Type in its purest form”.

Damien Jones, of the sales team at H&H, said: “I can’t say exactly how many of these E-Types are left but it won’t be many, that’s for sure.

“Just 92 were ever built and they are incredibly desirable and sought after.

“In this early form, with an external bonnet lock, is pretty much the E-Type in it’s purest form and we’re expecting there to be a lot of interest in it.

“It’s been recently restored and is absolutely bang on so we’d expect it to perform well at sale.”

Earlier this month, we reported on a refitted E-type which could be the highest specification model ever.