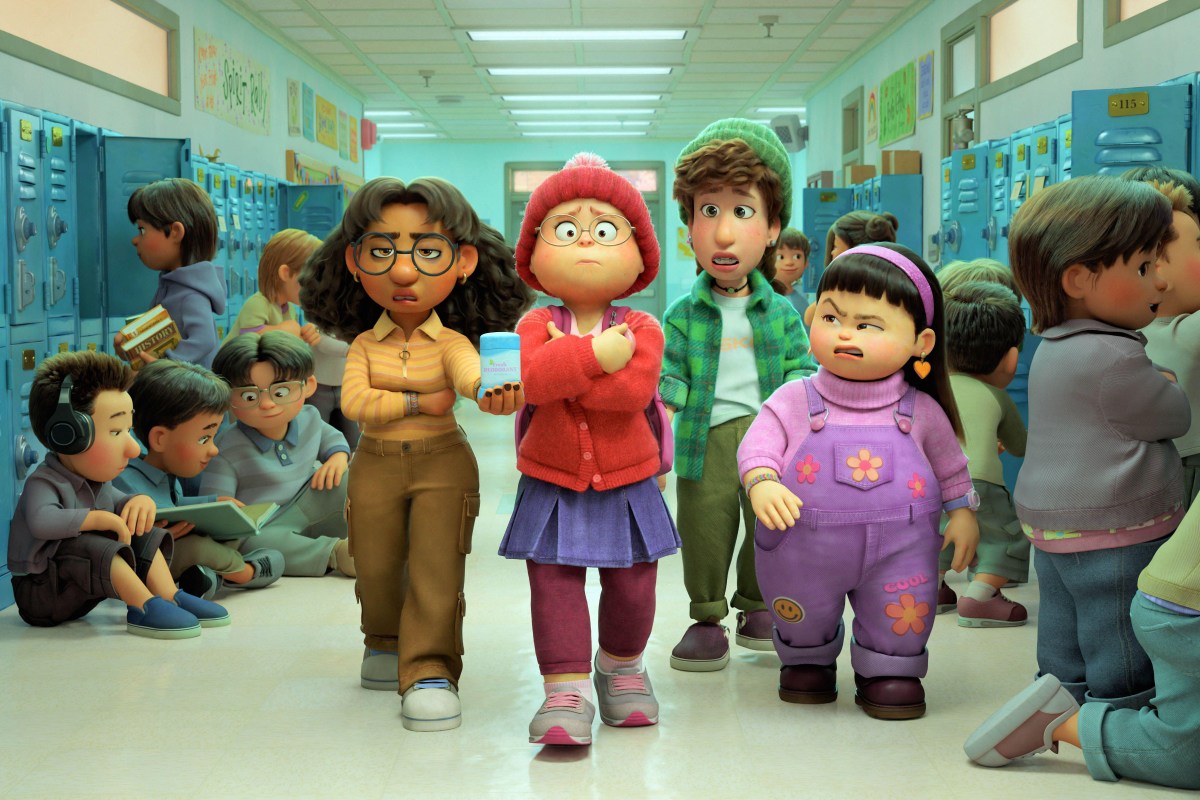 PUBERTY is something we all go through, but it’s not often the subject of animated Disney films.

Pixar has parked any prudishness to create this bold, hilarious and strangely beautiful take on a 13-year-old girl’s trip into the land of no return — adulthood.

Toronto schoolgirl Meilin Lee (Rosalie Chiang) is a studious, pupil who we meet in the last days of childhood. She loves her gal pals, who she performs made-up dances with, and is devoted to getting the best grades she can.

A sudden — and very passionate — crush on a local boy changes all this and turns her, quite literally, into a raging, hormonal, giant red monster with body odour.

Overprotective mum Ming (Sandra Oh) is concerned by her daughter’s sudden change in character and tries to help, thinking she is in need of some painkillers and sanitary towels.

But panty-liners and deodorant aren’t going to cut it, as Meilin transforms into a panda whenever she has a moment of heightened emotion. Which, aged 13, is often and she hides in the bathroom shouting, “What is happening to me?”

A feeling many of us can relate to. Directed and co-written by Domee Shi, this wonderfully funny and often brazen take on something every single girl-becoming-a-woman has to endure is refreshingly open and matter-of-fact.

Hormonal changes in girls have often been depicted in horror films as a time when females can be most dangerous. But Meilin is no Carrie, and there are certainly no buckets of blood to contend with.

She is bewildered by her new-found lust towards boyband 4HTown, and her new rebellious streak towards her parents, shouting at them: “I like boys, I like loud music, I like gyrating . . . I’m 13 — deal with it!”

Pixar has long been incredibly skilled in creating kids’ films with meaningful metaphors for the adult viewers — for example the tragedy of loss of imagination in Toy Story.

And this joyful movie addresses the completely normal aspect of womanhood so matter-of-factly it will create a lump in the throat of its more mature audience.

And don’t fear your children watching it if they don’t know about that yet. This is the perfect way for them to learn.

INDIE darling Sean Baker follows up his 2017 coming-of-age flick The Florida Project with this Texan comedy-drama that is just as rewarding.

Rex serves up his fast-talking, self-absorbed hustler with such obnoxious tones it’s a struggle not to eye-roll every time he spins a yarn to encroach on people’s homes and livelihoods.

Their age-gap romance might be uncomfortable, but Baker avoids romanticising it. And Son offers a grounded performance that avoids clichés.

Red Rocket is a darkly, funny anti-redemption story for our times.

HARD-HITTING yet devastatingly tender, this German language film chronicles the life of Hans Hoffman (portrayed with an outstanding performance by Franz Rogowski).

Hans is sent to a concentration camp for his homosexuality during World War Two and is then repeatedly incarcerated during the postwar years.

Prosecuted under laws prohibiting the “unnatural sex act committed between persons of male sex” over three decades, Hans finds himself imprisoned for choosing to live authentically with other men and pursue what the law then regarded as “deviant practices”.

Moving deftly between three decades during his sentences – served in 1945, 1957 and 1968 – before the law was finally reformed in 1969, the constant in Hans’ life becomes Viktor, his first cell mate – a violent, hostile, homophobic man who at first reacts aggressively to being confined with a “pervert”.

Each time Hans is released, new romantic relationships see him return defiantly to jail. And each time it is Viktor who is there to support him. Over time, the bond between the two men becomes a powerful, memorable love story of its own.