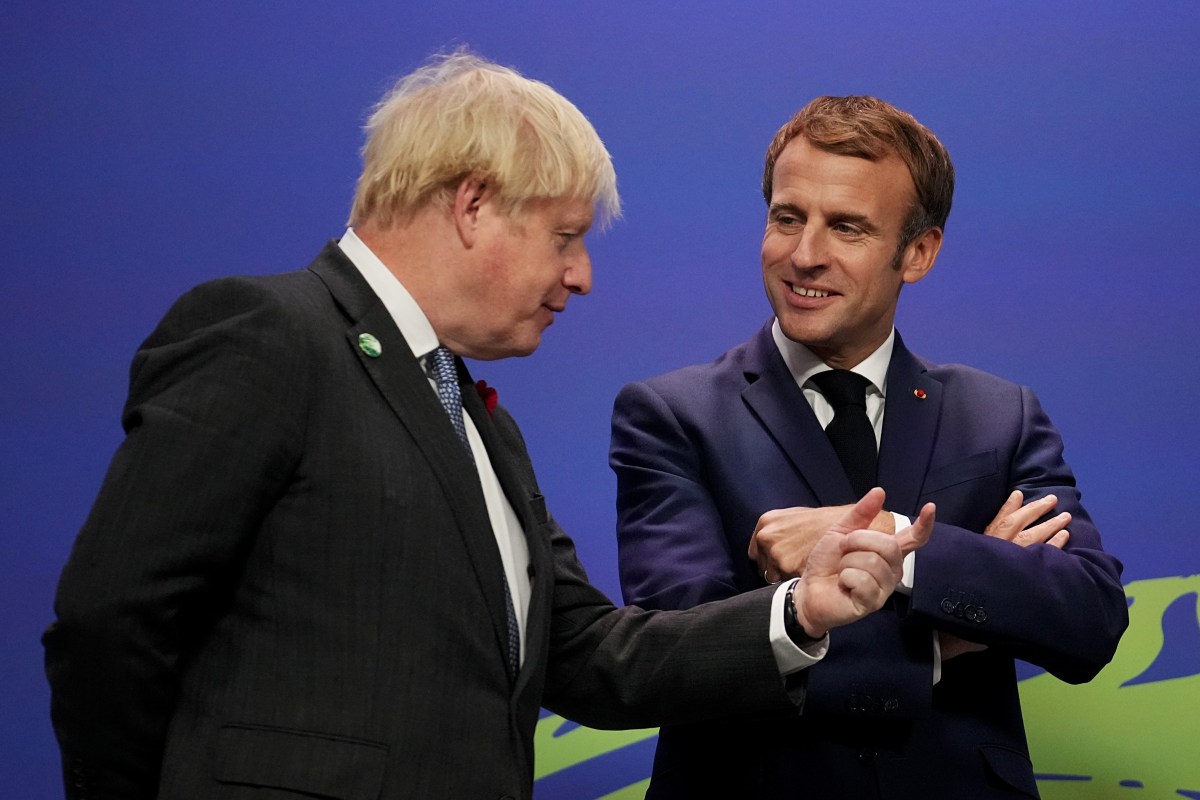 No 10 insists it’s ready to face down French threats and urged Paris to drop its punishment plans while there’s still time.

A Downing St spokesman said: “As you would expect, we have robust contingency plans in place.

“It is the French that made these threats and we are continuing to call for them to step back from those threats.”

But Mr Macron, who shared a tense meet and greet with the PM at the COP26 in Glasgow today, remained defiant.

The Elysée said retaliatory measures over rejected fishing licences will “come into force tonight at midnight” unless Britain caves at the last minute.

Crisis talks between British, EU, and French officials today are set to go down to the wire but look unlikely to yield a breakthrough.

Paris has vowed to begin disrupting trade between Calais and Dover from tomorrow by ramping up red tape and customs controls on lorries.

It will also step up navy patrols and spot checks on British fishing boats and ban them from landing their catches at French ports.

Mr Macron has threatened to go even further in future by hiking electricity prices for Jersey, which is supplied by an undersea cable.

Furious Foreign Secretary Liz Truss slammed the “unwarranted” threats from Emmanuel Macron and told him: “We simply won’t stand for that.”

She accused the French president of “behaving unfairly” and said the PM won’t hesitate to immediately trigger legal action against his country.

And she fumed: “The French have made completely unreasonable threats, including to the Channel Islands and to our fishing industry.

“If somebody behaves unfairly in a trade deal you’re entitled to take action against them and seek compensatory measures.

“That’s what we’ll do if the French don’t back down. We are simply not going to roll over in the face of these threats.”

The Foreign Secretary said No 10 is ready to trigger a legal case against the EU as early as tomorrow night.

If successful that “could lead to taking direct action in trade” against the bloc such as slapping tariffs on its goods.

And she voiced suspicions that the French election next April is the real reason for Mr Macron’s threats.

Senior figures in both Westminster and Brussels say he’s picking a fight with Britain for purely political reasons.

She fumed: “We should not be fighting with each other, we should be focussing our efforts on working together.

“I’m not remotely happy about what has happened. These threats are unwarranted and they’re not the actions we’d expect of a friend and ally.”

She also backed calls to reduce France’s leverage over Britain in the longer term by diverting trade away from the Calais to Dover route.

The French have made completely unreasonable threats. We simply won’t stand for that.

Ministers are looking at plans to ramp up capacity at lesser used ports and incentivise companies to ship via the Netherlands and Belgium instead.

Ms Truss said: “It’s important for the UK to diversify our trade and not become dependent on a single source of imports, or a single destination for exports.

“I fully support diversifying our trade and making sure we’ve got options because that puts us in a stronger position.”

The major row has erupted after the UK and Jersey rejected around 100 fishing licences for French boats to access our coastal waters.

France claims that breaches the terms of our trade deal with the bloc and is threatening sanctions from tomorrow unless more are granted.

No 10 insists the rejected trawlers don’t qualify because they can’t provide any proof they operated in those seas before Brexit.

Ms Truss insisted the UK is “entirely within our rights to allocate the fishing licences in line with the trade agreement as we have done”.

And crucially the EU Commission, which represents the continent in trading relations with Britain, isn’t supporting France’s claims.

Despite that, Mr Macron is vowing to press ahead with action on his own.

Last night he raged: “If the British make no movement, the measures of November 2 will have to be put in place. The ball is in Britain’s court.

“If the British keep saying and acting like they don’t want to reach a deal, which was signed, and they don’t start to budge, then it will be regrettable.

“We cannot help but respond and stand up for our fishermen.”