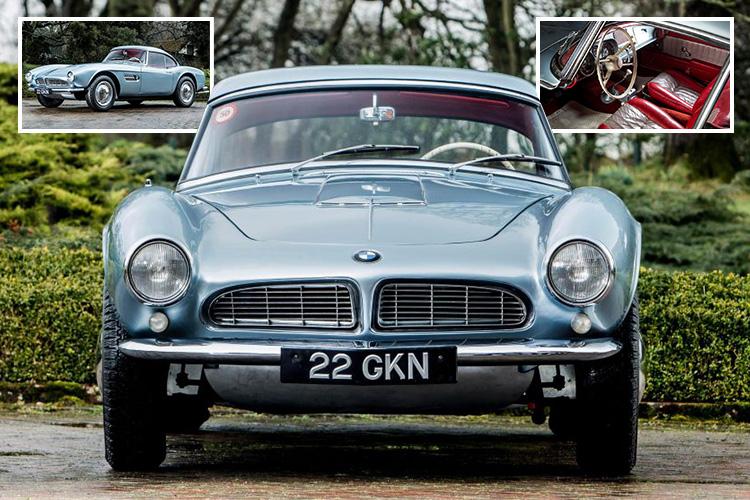 AN incredibly rare BMW that belonged to one of Britain’s top racing drivers has emerged for sale for over £2million.

The 507 Roadster was bought from new by a legendary motorbike and F1 racer, the late John Surtees CBE, in 1957 and remained in his possession until his death in March 2017.

When he first bought the car, Surtees was the reigning 500cc Motorcycle World Champion and came to an agreement with his team boss Count Agusta that he would pay half of the BMW’s £3,000 value as a reward for his success.

Surtees used the Roadster as his personal motor until he signed for Ferrari in 1962, when Enzo Ferrari himself banned the Brit from driving the German sports car.

Despite the ban he continued to own the two-door classic and after leaving the team it once again became his pride and joy.

The blue coupe was handed on to family after the racer passed away last year, and they have now decided to sell it with Bonhams Auctions at their Goodwood Racecourse sale on July 13.

The sports car is one of just 252 ever to be made and houses a 145bhp V8 engine, propelling the German motor to a top speed of 124mph.

It has a pale blue body, chrome trim and a plush red interior – all of which have been perfectly maintained and cared for.

The auctioneers are excited by the car’s potential and are expecting it to perform well when it goes under the hammer, anticipating offers of up to £2.2million.

A Bonhams Auctions spokesperson said: “This is not only a beautiful example of BMW’s most elegant and refined sports car from the 1950s.

“It is very much ‘the John Surtees BMW 507’, a one-owner beauty being offered for the first time at public auction, direct from the estate of one of the world’s most revered and successful sportsmen — an eight-time World Champion.”