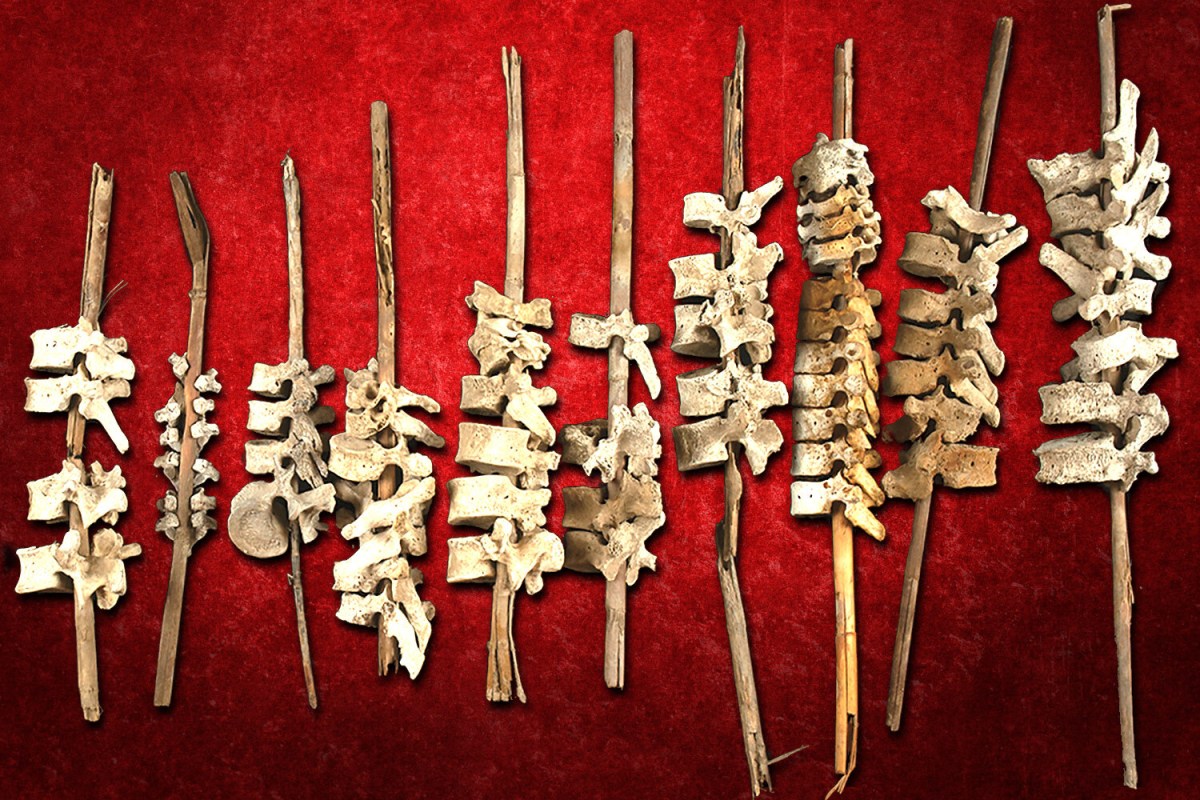 HUMAN spines that were threaded onto wooden posts 500 years ago as part of a gruesome ritual have been discovered in Peru.

Nearly 200 examples of the grim creations, believed to be attempts to reconstruct bones from ransacked graves, were found in the Chincha Valley.

Writing in a paper published today, archaeologists said that the vertebrae are believed to have been assembled between AD 1450 and 1650.

This aligns with a rough period in the region’s history when the rule of the Incas came to an end and European colonists looted indigenous graves.

“This was a turbulent period in the history of the Chincha Valley, when epidemics and famines decimated local peoples,” said study lead author Dr Jacob Bongers from the University of East Anglia.

The international team of researchers searched for “vertebrae-on-posts” in indigenous graves known as chullpas.

Hundreds of the large, elaborate structures are spread across the Chincha Valley, about 200 km south of Peru’s capital, Lima.

They discovered a total of 192 bone-laced posts, each of which appears to have been made with the remains of a single individual.

The researchers believe they were created as part of a ritual to reconstruct the deceased after their graves were robbed.

At the time, European colonisers would regularly dig up corpses to get their hands on the valuable jewellery and other trinkets buried with them.

“Looting of Indigenous graves was widespread across the Chincha Valley in the Colonial period,” said Dr Bongers.

“Looting was primarily intended to remove grave goods made of gold and silver and would have gone hand in hand with European efforts to eradicate Indigenous religious practices and funerary customs.”

Analyses of the remains suggest they were pieced back together in a bid to repair the damage done by looters.

Keeping the body intact after death was important to many indigenous groups in the region.

The Chincha Valley was home to the Chincha Kingdom from 1000-1400 AD before the group later merged with the Incas.

European colonisation proved catastrophic for the group, with their population
declining from over 30,000 heads of household in 1533, to 979 in 1583.

The research was published Wednesday in the journal Antiquity.

In other news, a four-tonne chunk of a SpaceX rocket is on a collision course with the Moon, according to online space junk trackers.

Boeing has sunk $450million into a flying taxi startup that hopes to whisk passengers across cities by the end of the decade.

Personalised smart guns, which can be fired only by verified users, may finally become available to U.S. consumers this year.

And, scientists are embarking on a mission to unravel the mystery behind dozens of grisly child mummies buried in an underground tomb in Sicily.