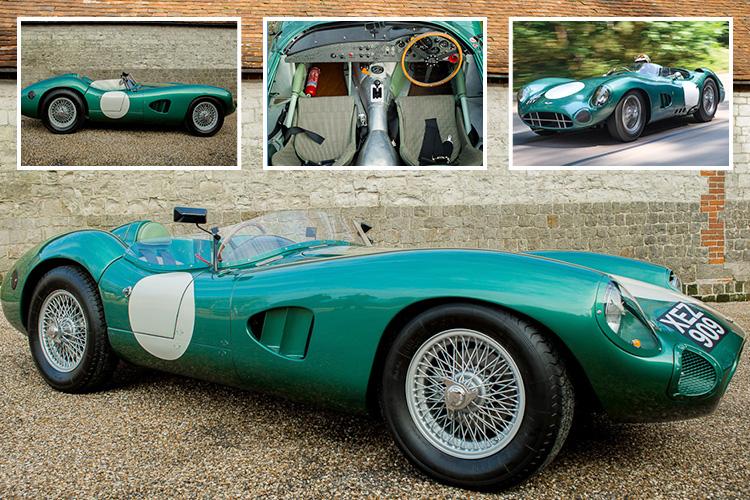 A NEAR exact replica of a £17million Aston Martin race car has emerged for sale for a fraction of the cost.

The original DBR1/1 racer made history in the World Sportscar Championship, once driven by Sir Stirling Moss, and is regarded as “the most important Aston Martin ever produced”.

Now racing enthusiasts have a chance to purchase the next best thing without going into enormous debt.

This replica by Evanta Motor Co. was created using over 150 photographs of an original Aston Martin DBR, with special attention to recreating the classic Racing Green body.

At the time of the original build, Evanta was owned by car designer and ‘Wheeler Dealers’ presenter, Ant Anstead.

The car’s interior is almost identical to the original motors, even including details like a hand painted crackle finish dashboard.

The seats were made in the same materials as the original DBR1, while dials and a steering wheel from the 1950s were sourced to keep it looking authentic.

The Evanta DBR1 is powered by a 4.2-litre engine, and comes with 16-inch wire wheels fitted with special period reproduction Michelin tyres.

It was previously sold by Silverstone Auctions in 2014 before being auctioned again in February 2016 and sold to its current owner.

Nick Whale, managing director at Silverstone Auctions, said: “The Aston Martin DBR1 is an icon in British motor racing history, and this is one of the best replicas we’ve seen.

“This Evanta is a very special motorcar with unique provenance and offers exclusive and seriously cool summer motoring.

“The true value of a genuine DBR1 is believed to be in the region of £20m, making this Evanta DBR1 the closest many collectors can get to owning the legendary racing car. It’s an opportunity not to be missed.”