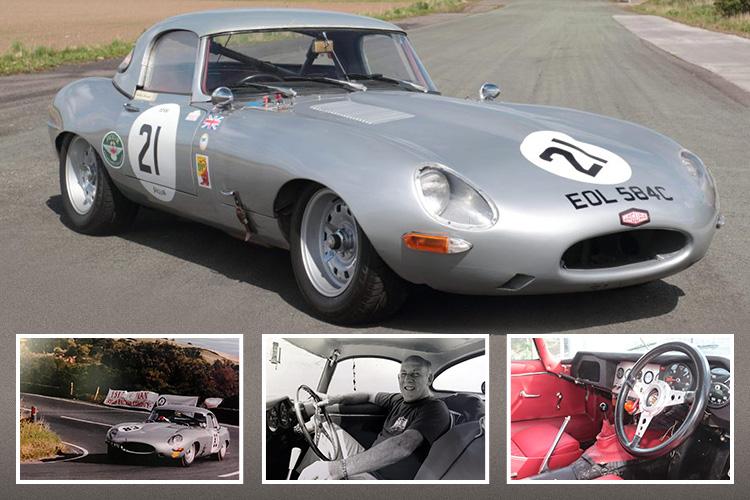 This 1965 Jaguar E-Type was the first of the classic motors to be driven competitively by the legendary Sir Stirling Moss.

The classic two-door began its life as a standard E-type, but was transformed into a road-legal lightweight racer by marque specialist Jeremy Broad in the 1980s.

After being driven by Moss in the early 1990s, the car returned to its owner, and was later raced by Le Mans and touring car legend Win Percy.

Despite the E-Type’s reputation for being among the most glamorous vehicles ever to hit the road, this one is actually much more simplistic than the usual model.

It has a basic interior with red leather seats, a black dashboard and a roll cage.

Under the bonnet, the motor still boasts a 4.2-litre full racing specification engine.

Sir Stirling Moss, who earlier this year retired from public life aged 88, drove the car in 1991 after remarkably never racing an E-type during their 1960s heyday.

Moss began his career as a Jaguar works driver, competing in C-types and XK120s in the 1960s but never got behind the wheel to race the marque’s most famous vehicle.

With this in mind, the three-time Monaco Grand Prix winner jumped at the chance when he was offered the chance to race this model at the 1991 Manx Mountain Challenge.

Damian Jones, of H&H Classics, said: “Being a vintage racing car this is something of an old war horse and is not the most luxurious thing you’ll ever come across.

“It has a great story and was driven by Sir Stirling Moss in 1991 Manx Mountain Challenge, in what was his first competitive drive in an E-Type.

“He and his partner didn’t enter the competition with the intention of winning but reports from the time all make reference to how much fun they both had behind the wheel.

“The car used to have FIA papers to enter historical races and could be returned to that specification but in the last few years it’s just been used as a fast road car.

“The owner has kept it for the last few years but he has a family and he’s now decided that he may need something with four seats from now on.”

The car will go under the hammer at the H&H Classics and Motor Sport Hall of Fame auction on June 5.