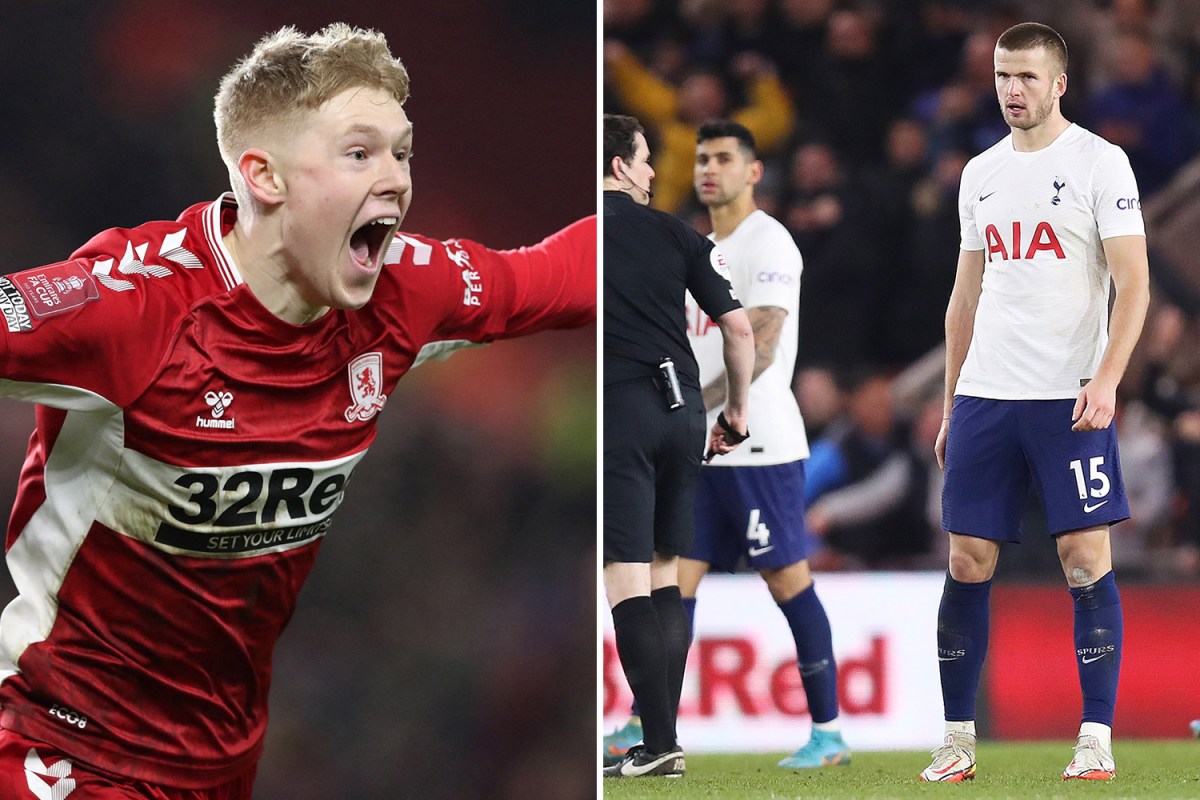 YOU can see why Chris Wilder refused to let Josh Coburn leave on loan in January.

Clubs were lining up to take the striker, 19, for the rest of the season but  the Middlesbrough boss stood firm.

The youngster has had to bide his time for opportunities — not that he will give a damn now.

But it was the least Tottenham deserved after yet another inept showing.

Boro had more than enough chances to kill Spurs off long before Coburn’s heroic intervention.

Playing it to Matt Crooks on the right, he followed his pass into the box and found himself unmarked.

Crooks slipped him in and Coburn did the rest, putting his head down and lashing an unstoppable drive past Hugo Lloris into the far corner.

In a fifth-round tie that started a snooze-fest but ended a classic, Boro deserve all the plaudits

It took 59 minutes for the first shot on target but nobody on Teesside will remember that after this latest famous upset.

Last time out it was Manchester United, beating the Red Devils on penalties at Old Trafford.

But they did not need to go that far this time, with the sell-out Riverside shaking when the final whistle went.

With the party in full swing around them, Tottenham’s flops left the pitch dejected with every single head down.

Conte went all in, selecting his strongest side available, so can there be no excuses for this latest meltdown.

But then, is this really that big a shock?

Having not lifted the FA Cup since 1991, what an opportunity this was to put themselves into the hat for the last eight.

But not even the most one-eyed Spurs fan could think they deserved to win here.

In fact, it should not really have gone to extra-time given the chances Boro wasted towards the end of normal time.

The atmosphere was crackling at kick off but the first half failed to live up to it, with neither side mustering a shot on target.

Nothing summed it up more than Matt Doherty’s woeful effort from distance in front of an open goal.

The dangerous Dejan Kulusevki’s ball down the right channel to the onrushing wing-back had keeper Joe Lumley in a right panic.

Needlessly rushing out he completely misjudged it, getting nowhere near the ball and allowing Doherty in — but he could only skew it miles over from an angle 30 yards out.

Luckily, the game turned into an absolute belter after the break.

Both sides had gilt-edged chances but it was the hosts that will have felt most aggrieved about it remaining goalless.

Harry Kane had the first chance after the break with a free-kick 25 yards out – only to draw wild mocking laughter when he slipped on his backside with the ‘effort’ barely reaching the wall.

Finally, 55 minutes in, there was a clear-cut chance — for Boro’s Crooks.

Jonny Howson’s corner was a peach, Tottenham’s marking was atrocious, and Crooks simply had to score four yards out, but could only spoon his header over.

Still we waited for a short on target, and it finally came four minutes later when Eric Dier — replacing Kane on free-kick duty — forced Lumley into a good save to his left from 30 yards.

Kane had the ball in the back of the net from the corner and charged off to celebrate, but the assistant’s flag went up.

Isiah Jones was denied by a scrambling Hugo Lloris at the end of normal time before an unchecked Howson headed the corner wide.

And their stirring effort was nearly all undone in the 93rd minute, but Son Heung-min could only head a deep cross straight at Lumley.

Into extra-time and it was Tottenham clinging on for dear life, Marcus Tavernier forced Lloris into action.

And the stage was then set for Coburn, signed from Sunderland’s academy in 2019, to write his name in Riverside folklore with a goal that will be remembered for years and years to come.