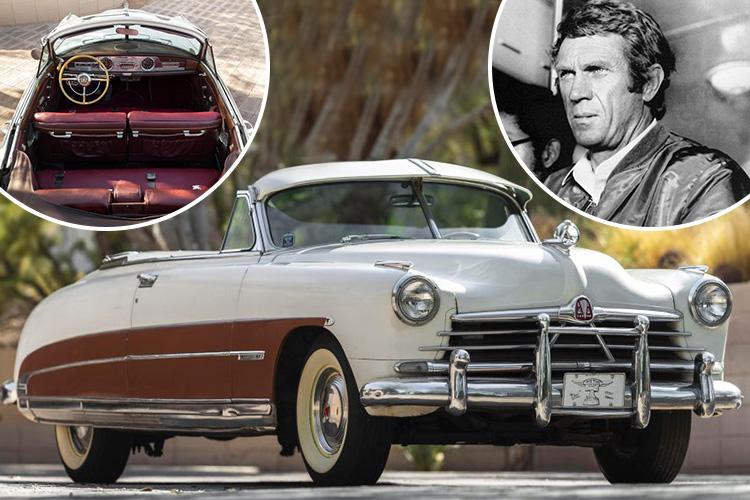 AN ENORMOUS convertible that Hollywood legend Steve McQueen used as his daily runabout has emerged for sale for £62,000.

The Hudson Commodore Six dates back to 1950 and was owned by the legendary actor for several decades until his death in 1980.

One of the most famous car collectors of all time, the Great Escape star had a huge soft spot for Hudsons and actually owned four of them.

This model is thought to have been his favourite, and was even used as his daily ride.

After the King of Cool’s death in November 1980, the Hudson was sold to one of McQueen’s friends, before it fell into the hands of its current owner in 2015.

It has barely been driven in the last few years, spending a significant amount of time in storage.

The open-topped coupe has a white and brown Americana-style body with chrome trim and a beige folding roof.

The interior has been perfectly kept and maintained, including plumb-coloured seats and a vintage chrome stereo.

Under the bonnet, the motor boasts a six cylinder 170bhp engine, which was upgraded during McQueen’s ownership.

The classic motor is now set to go under the hammer with Bonhams Auctions in California on August 24.

The two-door is being sold alongside a photocopy of the DMV registration document in McQueen’s name.

Eric Minoff, a senior specialist with Bonhams, said: “McQueen, while always a fan of swift sports cars from the likes of Ferrari and Jaguar, was also into the unique and sporting style of the Hudsons.

“It didn’t hurt that they had found success in NASCAR, which appealed to his sporting side, and this is one of several Hudsons that he owned and enjoyed.”