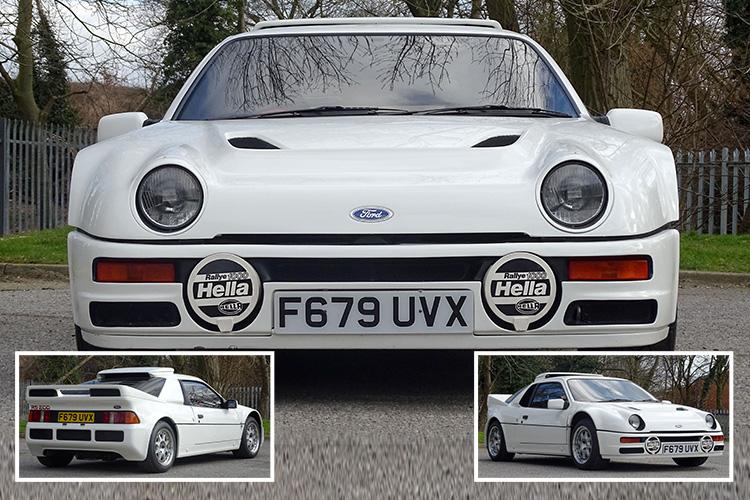 A RARE Ford rally car from the 1980s has sold for the same price as a new Bentley.

The rally star was built to compete in the 1986 Swedish-Finnish rally but never made it to the start line.

It means it’s covered just 4,000 miles and is one of the most sought after “Fast Fords” ever.

The RS200s were designed to compete in Group B rallying but the series was cancelled before the car could be properly honed and as a result very few were made.

Group B rally cars were the fastest, most powerful, and most sophisticated rally cars ever built and motorsport bosses soon became concerned by the increasing levels of speed in the off-road competitions.

Following a number of high-profile crashes, and in some cases fatalities, the decision was taken to abandon Group B rallies in 1986.

This meant that several RS200s went undriven for many years and as such they remain in original condition over three decades on.

The model that sold is no exception and has a white body that appears to be completely spotless. It has two doors and at the back of the vehicle is an rear enormous spoiler.

Inside there is a grey interior including a pair of racing seats – but there’s no sat nav, radio or even a boot.

The motor is powered by a 1.8 litre, four cylinder engine that produces around 450bhp and is mounted at the rear of the vehicle.

Damian Jones, of H&H Classics which sold the car, said: “Because Group B rallying was scrapped at the time it was, the RS200 never really got the credit or success it deserved.

“With a bit of time it could have gone on to be a real success in the field, similar to the Audi Quattro.

“The problem was that the speeds being achieved at that time would have been competetive on an F1 grid and when you’re going through the forest it just isn’t safe.

“We’re fairly happy with the amount the car was bought for, it’s in good condition and is a highly desirable piece of international motorsport history.”

The car sold as part of H&H’s sale at the Imperial War Museum in Duxford, Cambs, last week.