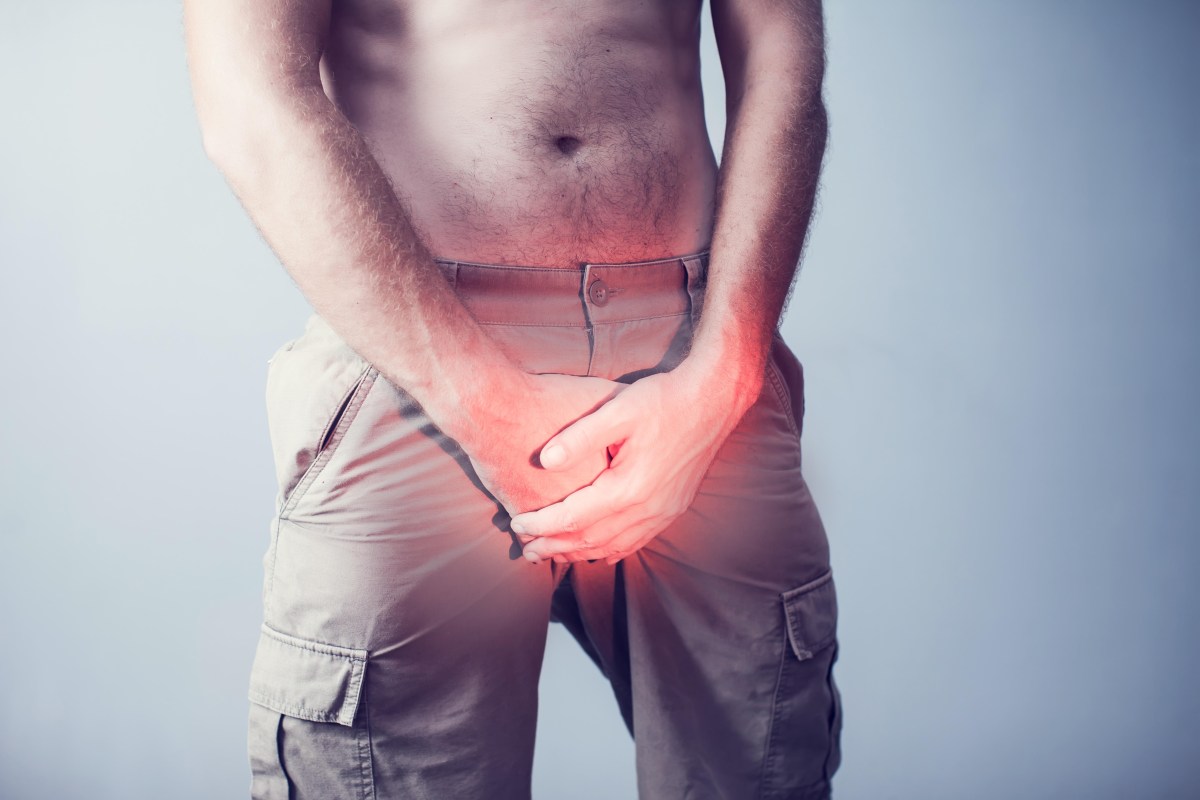 IT’S the stuff of nightmares for men.

But believe it or not, numerous studies have shown that the coronavirus can get into the penis, and potentially ruin its performance.

From penile shrinkage to erectile dysfunction, Covid symptoms down there can destroy a man’s confidence – and it may be long-lasting.

The latest study by Northwestern Medicine, in Chicago, showed how the virus can spread to all male reproductive organs.

Three male rhesus macaques were infected with Covid. This breed of monkey are often used in research before of their genetic closeness to humans.

Lead investigator Thomas Hope said: “The signal that jumped out at us was the complete spread through the male genital tract… We had no idea we would find it there.”

The virus had infected all three monkeys’ penises. One of the animals had infection in its testicles as well.

Prof Hope, professor of cell and developmental biology, said the study confirmed that it’s the virus itself that causes problems for men down there.

It has previously been suspected that the body’s reaction to Covid, including inflammation, is the underlying cause.

The new study shows how the virus can cause disease in the prostate (which helps produce semen), penis, testicles and testicular vasculature (blood vessels), Prof Hope said.

If Covid spreads into the prostate or testicles, it may decrease semen quality, for example.

Prof Hope said the results indicate that “reduced sperm count and quality, and decreased fertility” linked with Covid “are a direct consequence” of the virus, rather than the body’s response.

He added: “Even if this is [an effect on] only a small percentage of the infected, it represents millions of men who may suffer from a negative impact on their sexual health and fertility.

“The potential impact of SARS-CoV-2 infection on sexual and reproductive health should be part of everyone’s decision to get vaccinated to minimize the chance of death, severe disease and hospitalisation, and infection of the prostate, penis, testicles and vasculature (blood supply) of testicles.”

But countless evidence has shown that the virus can enter – and therefore likely cause damage to – the blood vessels of the penis, too.

Covid enters the endothelial cells of the blood vessels found in many organs, which can stop them from working properly.

Researchers in Miami said that Covid can cause widespread dysfunction in endothelial cells – those that line blood vessels – “in organ systems beyond the lungs and kidneys… including the penis”.

The Miller School’s Reproductive Urology Program found the virus was present in the penile tissue of two men who survived Covid, and had since had erection problems, but not in the samples of two healthy men.

Meanwhile, the infection is known to increase the tendency of blood to clot.

Theories include that an overactive immune system causes blood-clotting cells to go into overdrive.

In the penis, blood clotting could cause agonising pain, as described by Iranian doctors in a 41-year-old male.

But it could also disrupt the normal functioning of the penis, as explained here…

Although a “long-lasting erection” may sound ideal for men wanting to last longer in the bedroom, this side effect is far from favourable.

Medics have reported cases of men whose erections have lasted hours on end or even days.

Usually it’s treated by either an injection into the penis, using a needle or small incision to drain the blood from the erectile chambers, or by applying ice.

Medics first reported Covid-related priapism in a 69-year-old man in Ohio, US, who later died of the virus.

A poor 12-year-old boy endured a 24-hour erection before being seen by doctors in Vienna, Austria.

Although they tried multiple methods to reduce his erection, the condition was persistent, causing two more episodes.

The doctors wrote: “Several cases of ischemic priapism have been published, most of them affecting patients with severe symptoms requiring hospitalization and ICU admission.”

In both cases, there was evidence of blood clotting in the corpora cavernosa – the spongy tissue in the shaft of the penis that fills with blood to cause an erection.

From early on in the pandemic, doctors started warning that Covid could cause erectile dysfunction in men.

The condition can be offset by a huge list of problems, so there could be something else behind mens’ impotence.

But given that other vascular diseases, such as coronary artery disease, high blood pressure and diabetes, can cause erectile dysfunction, it’s not totally unsurprising that Covid might.

Dr Ryan Berglund, a urologist at the Cleveland Clinic in Ohio, told the LA Times that he had seen patients for this problem.

He said: “The blood vessels themselves that can become inflamed… could cause an obstructive phenomenon and negatively impact the ability to get erections.”

Emmanuele Jannini, professor of endocrinology and medical sexology at the University of Rome Tor Vergata in Italy, said the virus “triggers inflammation of the blood vessels”.

“When those blood vessels and the rest of the cardiovascular system are harmed, it can trigger erectile dysfunction”, he wrote in an scientific article published in July 2020.

There are a couple of other theories, including that a lack of oxygen associated with struggling lungs may “impair erectile function”.

The Miami urologists who discovered the coronavirus can enter the penis had seen two men that had been suffering erectile dysfunction.

They had “normal erectile function” prior to getting Covid, according to findings published in the World Journal of Men’s Health.

But seven to nine months after their infections, they sought penile implant surgeries.

A study of 3,400 people led by University College London found that of 200 reported long Covid symptoms, a smaller penis was one of the rarer ones.

Almost five per cent of men suffered a “decrease in size of testicles/penis”, according to the findings which were published in the Lancet’s EClinicalMedicine.

One unlucky man admitted this had happened to him – and experts say it’s likely a domino effect from the damage the virus had on his blood vessels.

Before, the 30-something American said his penis was above average size.

Calling in to the podcast “How to Do It”, the man said: “In July of last year I contracted Covid and was very sick.

“When I got out of the hospital, I had some erectile dysfunction issues. Those gradually got better with some medical attention, but I seem to be left with a lasting problem.

“My penis has shrunk. Before I got sick, I was above average, not huge, but definitely bigger than normal. Now I’ve lost about an inch-and-a-half and become decidedly less than average.

“It’s apparently due to vascular damage, and my doctors seem to think it’s likely permanent.

“It shouldn’t really matter, but it has had a profound impact on my self confidence in my abilities in bed.”

Ashley Winter MD, a urologist in Portland, US, and associated with Kaiser Permanente, told the podcast: “It is true that having erectile dysfunction leads to shortening.

“You have this period of time where the penis is not stretching itself out, where it’s not, you know, getting all this full blood into it, and that can lead to scarring of the penis and shortening of the penis.”