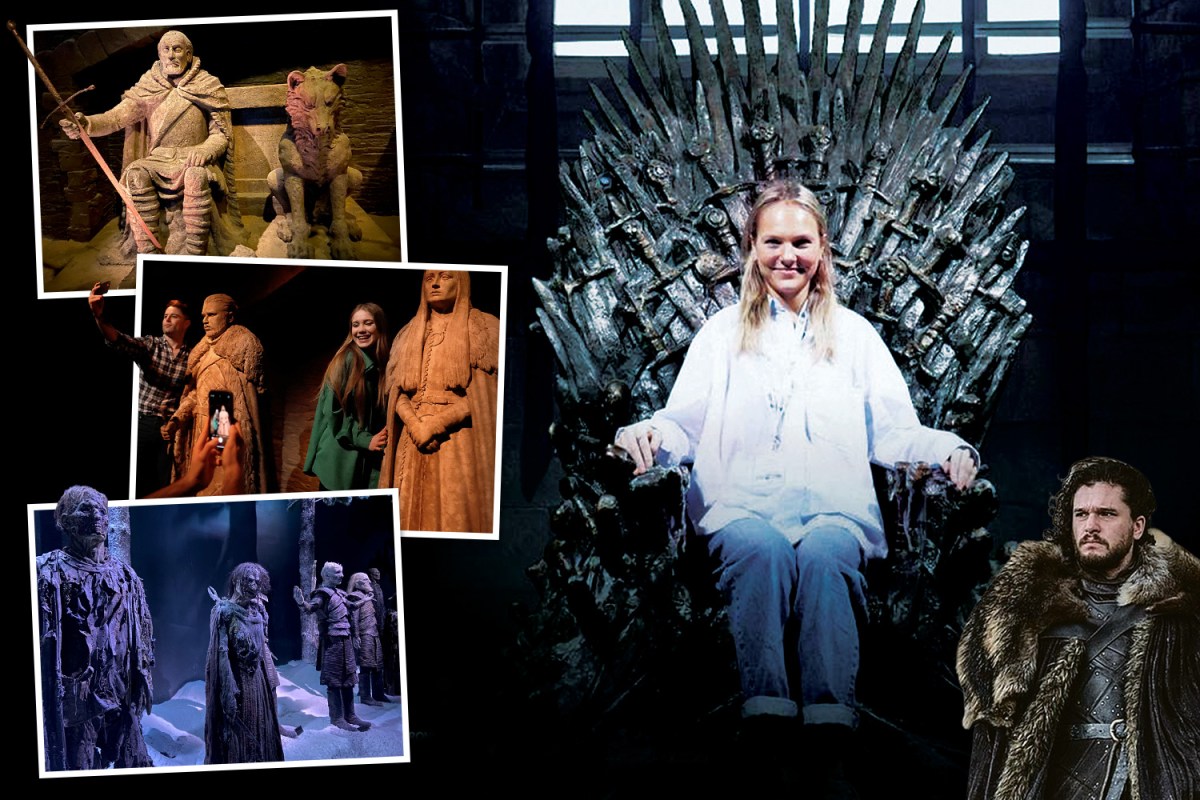 DRAWING my giant bow, I take aim at the zombie-like creature scrambling across the screen in front of me.

I release the string, sending a flaming arrow into its body and dropping it to the floor. The screen flashes: “1 Wights.”

I am in the fictional kingdom of Winterfell and my job is to defend its mighty fortress from the undead, playing my part in a fierce battle from Game Of Thrones’ final season.

I down three wights in total. The guy next to me kills 30.

This game is one of the many interactive activities at the new Game Of Thrones Studio Tour near Belfast.

On the tour I am transformed into the villainous Night King himself and even have my grinning face placed among the gormless ones in the Hall of Faces, where Arya Stark learns to become an assassin.

Tucked away in the countryside town of Banbridge, one of the show’s filming locations, the £40million attraction is Game Of Thrones’ answer to the Harry Potter Studio Tour near London.

Fans of the wizarding franchise will recognise similarities between the two tours.
Standing in a blue-lit room, the wall comes to life in front of me and the exhibition kicks into action with scenes of soaring dragons and those eerie White Walkers.

That potent theme tune thunders throughout the room and suddenly the wall opens to reveal a huge iron door, behind which lies a snowy tunnel and the tour entrance.

The tour typically takes between one and three hours, although fans can spend as long as they like getting stuck into scene sketches, real-life costumes and prosthetics or weapons.

But the interactive tools and realistic sets are what bring the story to life.

“You’ve seen it on the screen but now you’re actually in it,” says actor Ian McElhinney, who plays the Lord Comm­ander of the Kingsguard.

It feels like I have walked not onto a TV set but into the fictional world itself, as I meander through mighty stone archways and ivy-wrapped pillars into the map courtyard where Cersei Lannister plotted her conquest of Westeros.

Then, I end my visit in heroic victory, with a seat on the Iron Throne and taking with me a souvenir snap in front of a green screen that places me in the throne room I have seen on TV.

The Studio Tour is just the start for Game Of Thrones fans visiting this part of Northern Ireland.

“What Harry Potter has done for the UK and what The Lord Of The Rings has done for New Zealand, Game Of Thrones has done for Belfast,” says tour guide Maire, who runs themed tours in Belfast.

Fans can walk the three-kilometre Glass Of Thrones trail around the Maritime Mile, which features six ornate stained-glass windows inspired by the TV show.

The windows were unveiled one by one in 2019 to coincide with the release of each new episode of the final season and the artwork is not to be missed. No trip to Belfast is com­plete without a pint or two of Guinness and thirsty visitors can knock them back on a Thrones-themed pub crawl.

Dotted around the city, hidden in various pubs, are ten wooden doors with carvings of dragons and house crests. Once you have had your fill of fandom, Belfast is bustling with great restaur­ants, shows and museums.

The Titanic Museum on the Queen’s Road is celebrat­ing its tenth anniversary and delves into the tragic history of the sunken liner.

Those after a tipple won’t be short of choice. The Grade A-listed Crown is one of the oldest pubs in the area.

Once a Victorian gin palace, the beautiful building has retained many original features including old-fashioned booths with varnish­ed doors and colourfully tiled floors.

It’s fit for a queen.

STAYING THERE: The Europa Hotel in Belfast city centre has room-only doubles from £99 per night. See europahotelbelfast.com.

GETTING THERE: BA Cityflyer flies from London City to Belfast City for £39 each way. See britishairways.com.

OUT & ABOUT: Tickets for the Game Of Thrones Studio cost from £39.50 per adult, £27.50 per child and £115 for a family of four. Those staying in Belfast can buy a return coach package and Studio Tour ticket from £59 per adult and £39 per child. See gameofthronesstudiotour.com. More info is also available at ireland.com.