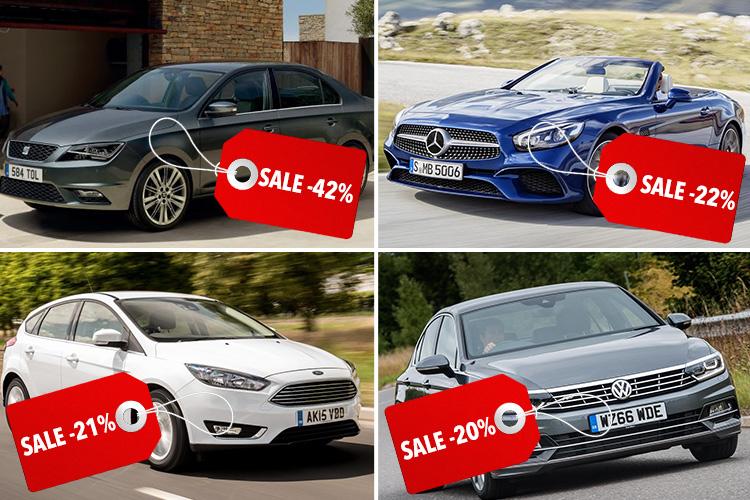 FOR anyone looking to buy a new car, now is the best time to sign on the dotted line.

Dealers are currently offering the the biggest discounts the market has seen in the last year with some new cars selling for almost half price.

According to data from What Car?, almost a quarter of dealerships around the country are offering savings of at least 10 per cent, while the national average sits at just over eight per cent.

Money off totals £2,500 on every car this month – the highest for a year – and deals are even available on SUVs and city cars which normally hold prices.

Some motors are going for even less and a recent investigation has uncovered the best prices on offer for popular models in the UK.

What Car? revealed drivers could save a whopping £7,790 on the SEAT Toledo with its 42 per cent discount.

Motorists looking for a smaller car can save big on the Fiat Punto, which has had its price slashed by over 25 per cent.

SEAT models carry some of the best deals with a similar discount for the Mii hatchback – and 15 per cent off the new Ateca.

The popular Ford Focus is also offering big savings for buyers, with a maximum discount of 21 per cent available.

While classy Volvo s60 T4 sedans and Citroen Berlingo vans are available for just 78 per cent of the regular list price.

And its not just hatchbacks and family sedans that are being reduced.

latest motors up for sale

Steve Huntingford, What Car? editor, said:  “We are truly in a buyer’s market right now.

“Even sectors where big discounts are normally harder to come by, like city cars and small SUVs, are now generating great deals.

“Current pressures on the car industry, plus a barrage of new products flooding the market, mean that there are some very attractive PCP deals on offer if you know where to look and do your research.”