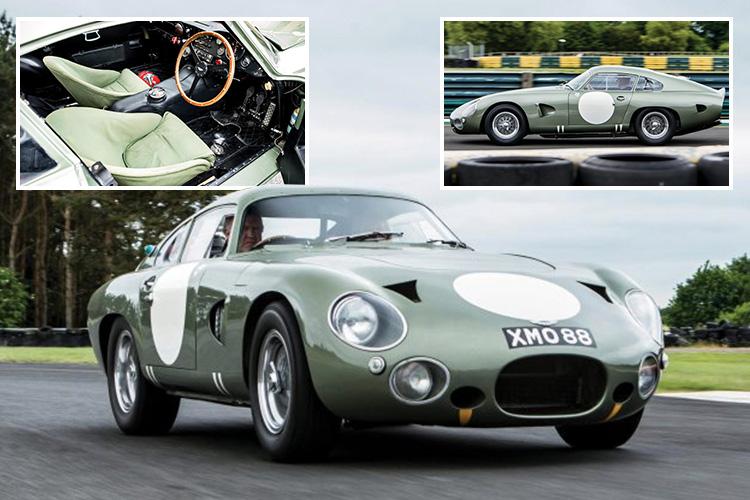 Auctioned off in California over the weekend, the motor fetched US$21.5million, falling just £800,000 short of the current Aston Martin record.

The DP215 Grand Touring Competition Prototype was an ultra-light, aerodynamic racer fitted with a 4.0-litre engine.

And it was the first car to hit 300kph (186mph) down the famous Mulsanne Straight at Le Mans during practice ahead of the 1963 race.

The Aston was 12 seconds per lap quicker than the Ferrari 250 GTO but was forced to retire that year after just 29 laps due to gearbox issues.

The former racer was the only team car kept by Aston Martin after the manufacturer shut down its racing department, developing it in the hopes of an eventual return to racing in 1965.

But these hopes were shattered when DP215 was in an accident during night testing on the M1 motorway.

The car’s former owners, vintage racing drivers Neil and Nigel Corner, later completed DP215’s restoration by reuniting it with its original engine, which had been separated early in the car’s history.

The Brit father and son duo bought the car in 2002 and drove it to Italy and the South of France, through the centre of Paris and “over every road” in Scotland.

Going up for sale with RM Sotheby’s, the incredible motor was hot property at the August 24 auction.

The car was originally tipped to break the record for the most expensive Aston, but came up just shy on the day.

Neil Corner said: “The lines of the car are absolute perfection. You can see where its outstanding maximum speed came from.

“What’s more, its performance cannot be overemphasised – from a driving point of view, the acceleration in 2nd and 3rd gears always caused the hairs on the back of my hand to stand up.

“The car feels like a thoroughbred to drive – the steering is delightfully light, the brakes are outstanding for the era, and there’s nothing quite like the bark of its incredible exhaust note.

“I’ve driven DP215 everywhere, from rush hour traffic in the busy streets of Paris to full speed on some of the world’s greatest circuits, and I can attest that its performance is unbelievable on road or track.”

Alain Squindo, chief operating officer for RM Sotheby’s Group, said: “The DP cars are completely one-off competition projects and are essentially on their own level when it comes to Aston Martin racing royalty.

“DP215 is the pinnacle of the Works team’s racing development, and the new owner will acquire a car that is not only extraordinarily special but also more capable of running at the front of the pack than virtually any other racing car on the market.

“We’ve had the pleasure of offering some of the world’s most important Aston Martins at auction, including the record-setting DBR1/1 and the DB4GT Prototype at Monterey just last year, and we’re tremendously honoured to add DP215 to that list.”