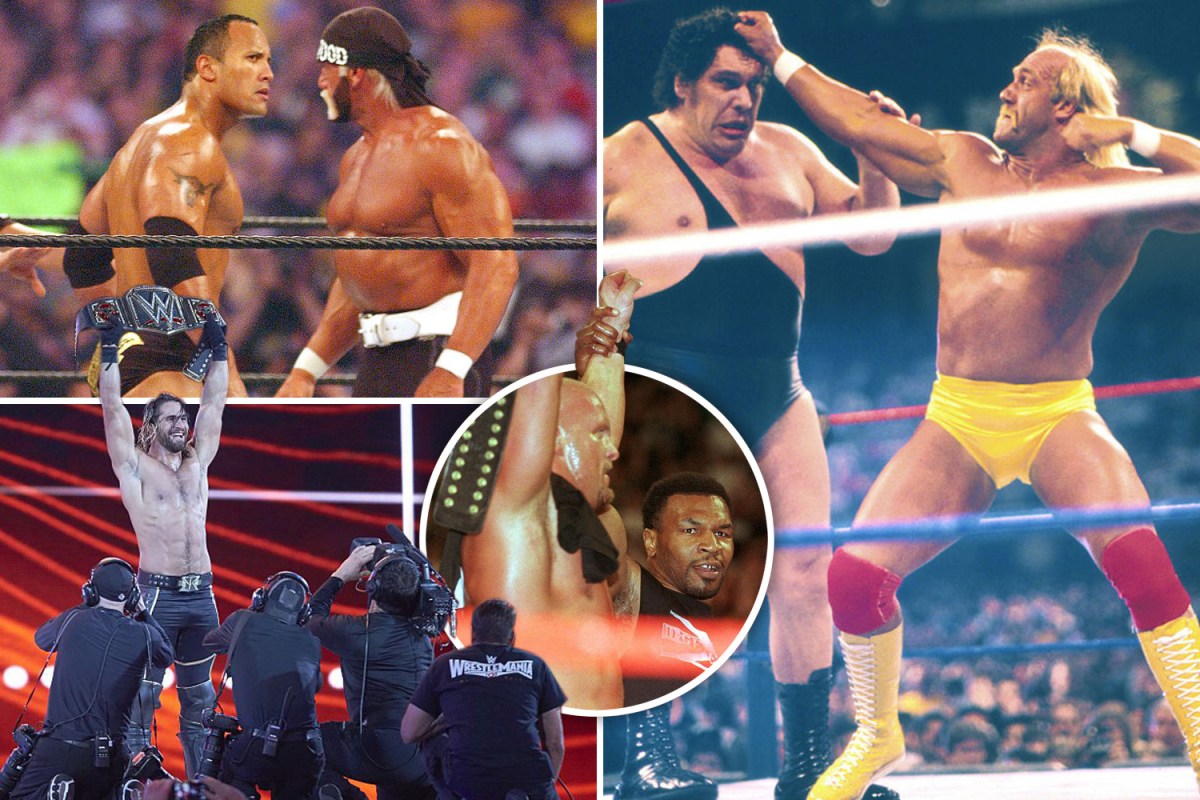 FOR nearly 40 years WWE’s WrestleMania has produced some of the most breathtaking moments in sports entertainment.

Nicknamed the Showcase of the Immortals, it’s a show in which superstars are made and careers are defined.

WrestleMania 38 is now just weeks away and is already shaping up to best one of the best ever.

The legendary Stone Cold Steve Austin has confirmed he will return to the ring at the spectacular next month.

And we will also have Logan Paul competing inside the squared-circle for the very first time.

But until then, we run through our top 10 WrestleMania moments to whet your appetite:

Seth Rollins cashes in Money in the Bank (WM31)

At the start Lesnar was an unstoppable force, tossing Reigns around the ring. But as the match went on both superstars spent time brutalizing each other.

Once both superstars were down, Rollins’ music hit and he ran down the ramp with the Money in the Bank briefcase as the match became a triple threat, with Rollins walking away victorious after hitting Reigns with his signature curb stomp finisher.

The 60-minute Iron Man Match between Shawn Michaels and Bret Hart was arguably one of the greatest in WrestleMania history.

An Iron Man match is a contest that is set to go a specific amount of time, usually 30 or 60 minutes, with the competitor boasting the most falls at the end of that time named the winner.

After winning the 1996 Royal Rumble, Michaels earned an opportunity at Hart for the WWE, then WWF, world title.

Michaels’ entrance that night is still an iconic moment, as he rode a zip-line from the rafters as the sea of fans below watched in amazement.

Michaels descended towards the ring on the line sporting his signature flashy attire.

Both men put on a show and the match ultimately went into sudden death overtime.

Michaels overcame Hart in the overtime period, ending The Hitman with his signature Sweet Chin Music to win his first WWE world title.

One of the great moments in wrestling: Hulk Hogan vs Andre the Giant at WrestleMania 3.

The slam heard around the world occurred when Hogan picked up Andre and body slammed him in the ring, blowing the roof off the arena.

Andre stood at 7’4 and weighted an enormous 520lbs, so the strength displayed by Hogan was remarkable.

The build up to the match had focused on whether Hogan could slam Andre. Early on, Hogan went for the slam only for Andre to fall on top of him.

As the match reached its conclusion, a Hulked-up Hogan slammed The Giant and followed up with his signature leg drop before pinning the large Frenchman.

In the weeks leading up to the event, during an episode of Monday Night Raw Tyson and Austin were involved in a scuffle that had to be separated by officials.

In the following episode of Raw, Michaels and D-Generation X interrupted a segment between Tyson and Vince McMahon, which led to Michaels calling out Tyson for a fight.

Michaels being the practical joker he was, fooled the WWE audience by ripping off Tyson’s t-shirt to reveal him sporting a DX t-shirt underneath ushering him as a member of the group.

At WrestleMania, Austin would still overcome to odds after he hit Michaels with a Stunner while Tyson counted the fall.

Tyson would eventually side with Austin, crowning him the new champion.

After the loss, Michaels tries to get an explanation from Tyson and puts his hands on him, as he gets knocked out with a Tyson right hook to the delight of fans.

A match that defined the career of three young tag-teams, the tables, ladders and chairs match between the Hardy Boys, the Dudley Boys, and Edge and Christian stole the show at WrestleMania 17.

The three teams paved the way for some of the newer guys in WWE today.

Competing in a Ladder match for the WWE tag-team champions the year prior at WrestleMania 16, the trio went at it again on the grandest stage of all.

With so many memorable moments the one that blew the roof off the Reliant Astrodome was the spear by Edge on Jeff Hardy.

Hardy was hanging 15 feet in the air when Edge speared him, as he launched himself from a ladder.

In the end, Edge and Christian captured the tag-team title, just like they had the year previous.

For the second consecutive year, the Undertaker and Michaels’ faced off in a match that was billed as the streak vs the career match.

What followed was an exhibition, a flurry of submissions, a ringside tombstone, a moonsault on the announcers’ table and several close calls for each fighter.

After Taker delivered a second tombstone pile-drive, everyone thought the match was over, but Michaels refused to stay down.

The Undertaker’s face was in disbelief, after Michael’s kicked out and moments later shouted “Stay down” to the staggering Michaels.

This time Taker delivered a jumping tombstone and covered Michaels for the last time, ending the Heartbreak Kids career.

Two of the biggest stars in wrestling history went one-on-one in 2002, though there was no gold on the line.

The Rock, who at the time was the biggest star in WWE, and Hollywood Hulk Hogan, who was a member of the New World Order, faced-off at WrestleMania 18.

Both men went the distance in the match, with The Rock ultimately walking away victorious.

The win over Hogan would cement The Rock as “the guy” in the company at that time. It was also symbolic of Hogan passing the torch to The Great One.

Just like The Undertaker ended Shawn Michaels’ career, the Heartbreak Kid delivered the same end to Ric Flair two years prior at WrestleMania 24.

At the time, Michaels often cited The Nature Boy as his childhood hero and proclaimed him to be the greatest wrestler of all time.

They became friends too, which made the encounter even more painful for fans.

Both men broke down in tears in the middle of the ring after the match.

But before Austin got his shot at Mania, he first had to see who he would face as The Rock and Angle were set to fight for the title at the pay-per-view event before WrestleMania, No Way Out.

The Rock would eventually pin Angle to be crowned the new champion, which set the stage for the mega clash between The Rock and Steve Austin at WrestleMania 17.

Moments before the match started it was announced that it would be a no disqualification match, surprising fans.

The two stars produced a stunning fight, including an iconic moment when Austin had blood streaming down his face, similar to his WrestleMania 13 match against Bret Hart.

With the help of Vince McMahon, Austin went on to win the WWE title from The Rock after striking the Great One with multiple chair shots to the body.

After the match, wrestling fans cringed at the site of Austin and McMahon shaking hands and drinking a beer together following years of conflict between the two.

Perhaps the greatest WrestleMania moment goes to Brock Lesnar and his stunning win over The Undertaker.

Taker had immortalized his legacy at WrestleMania by going undefeated for 21 straight years.

All of that changed at WrestleMania 30 when Lesnar pinned Taker after hitting a third F5, his signature move, to hand the Phenom his first ‘Mania loss.

The stadium filled with more than 75,000 fans went completely silent after the bell.