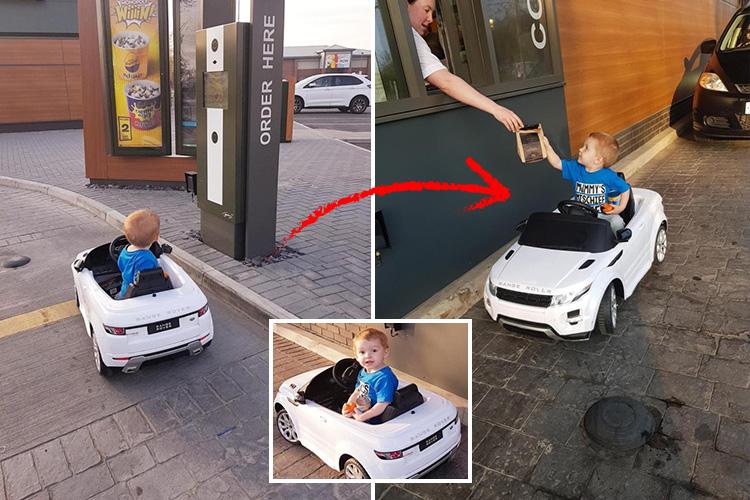 TODDLER Austin Turner collects his McDonald’s drive-thru order — which he placed from his toy electric car.

Austin, two, ordered a cheeseburger from his mini Range Rover.

Dad Paul, 40, from Doncaster, had let him pootle into the takeaway lane when it was quiet.

Paul, of Doncaster, South Yorks., said: “When we walked over to McDonald’s there weren’t many cars around, so I thought ‘why not?’

“So I took him round to the drive thru.

“When we got to the window he just said ‘I want a cheeseburger’ and handed the money over.

Laughing staff and other drivers were bemused to see the toddler place his order from the miniature car.

Paul added: “The staff thought it was hilarious and some others came over to see what was going on.

“I’ve read about people on horses, but nothing like this.”

But big bosses rapped drive-thru staff for allowing in a non-roadworthy vehicle.

A spokeswoman said: “Our drive-thru lanes are specifically designed for roadworthy motor vehicles, and only people in such vehicles will be served.

“Anyone attempting to use a different mode of transport will be asked to make their order inside.

“In this instance by serving the child and his parent, our restaurant team did not follow this procedure – and those involved have been reminded of the policy.”