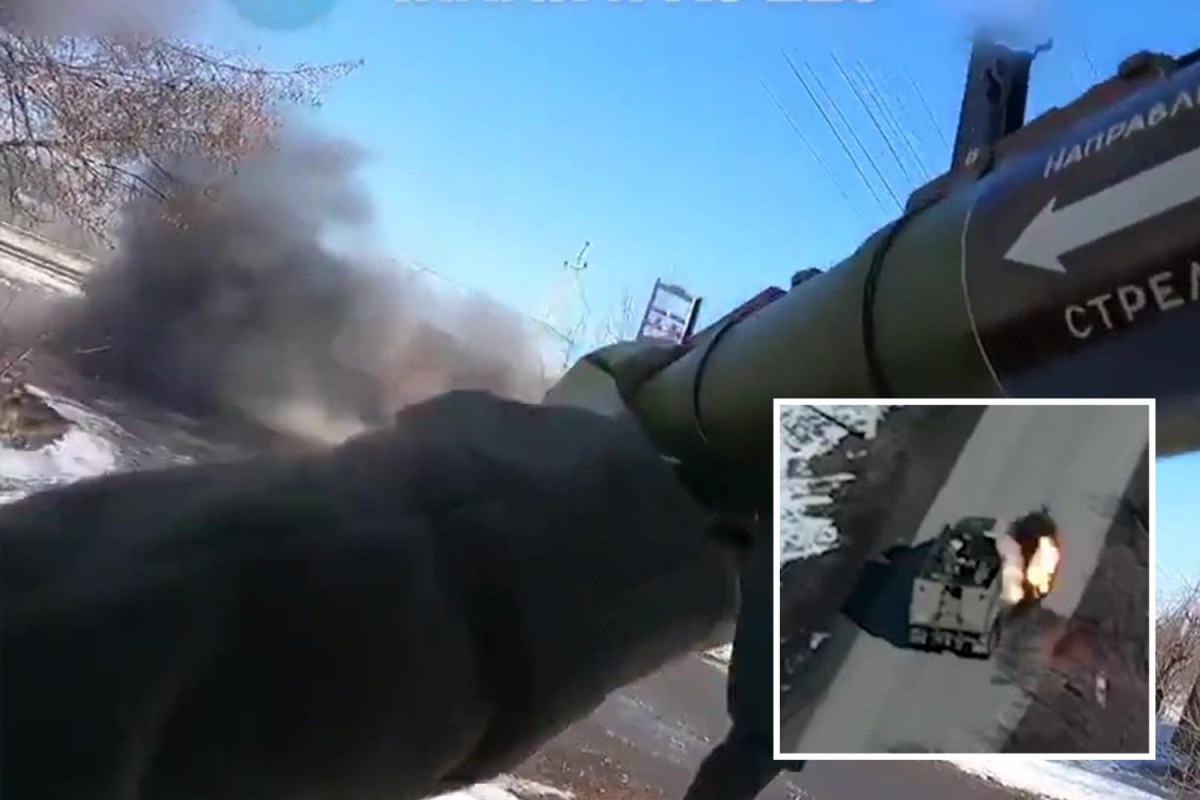 THIS is the dramatic moment a Ukrainian soldier blows up what is believed to be a Russian special forces truck with a powerful rocket launcher.

Footage of the latest successful ambush shows the military vehicle filled with troops careering off-road after it was struck.

One clip shows the lone truck traveling near Kozacha Lopan, close to the Ukraine-Russian border, before a single shot is fired from behind.

A second vid filmed from a birds-eye view then shows the moment the Russian special forces vehicle is blasted, before a cloud of black smoke erupts.

The ambushed truck is then seen swerving in the road as Putin’s men try to keep control, before crashing into a road sign.

The action-packed video was shared on Telegram by Ukrainian MP Yuriy Mysiahin, who suggested the soldiers had been killed.

No deaths in relation to this incident have yet been confirmed.

He wrote in a chilling taunt to Russian forces:” Now the occupiers will have to rest and fertilize the Kharkiv land.”

Mysiahin applauded the efforts of the Ukrainian troops, who he said were from the 226th Battalion of the 127th Brigade.

According to local reports, the village of Kozacha Lopan was shelled by Russians on March 16, killing at least three people.

Ukrainian citizens have continued to be slaughtered as the stalling invasion rages into its fourth week.

At least 10 people were killed after Russian troops reportedly opened fire on Ukrainian civilians queueing for bread at around 10am yesterday.

But Ukrainian forces have refused to falter, claiming to have successfully obliterated hundreds of tanks and armoured cars.

Soldiers fired at least five fireballs at a Russian Z tank, blowing it to bits as the desperate crew ran for their lives in Mariupol.

Shocking high definition footage shows the battle tank with a distinctive Z marking driving through deserted streets before being wiped out.

And another Call of Duty-style clip captured the moment Putin’s troops cowered behind a tank before it was decimated by Ukrainian fire.

It comes as Western countries claimed Russian soldiers are no longer making progress on the ground.

British military intelligence said in an update on Thursday that they had suffered heavy losses from a “staunch and well-coordinated” Ukrainian resistance.

Another Russian convoy was destroyed by brave Ukrainians using lethal anti-tank on Sunday.

A rocket made a direct hit as the terrifying tanks rolled down the streets, causing troops to quickly scatter.

The vehicle is then seen bursting into flames in the extraordinary footage.

It comes after a column of the Kremlin’s tanks were pulverized during another ambush near Kyiv.

The attack reportedly claimed the life of yet another senior Russian commander as Vladimir Putin’s forces press in on the capital city.

Although both sides have pointed to limited progress in peace talks this week, Putin, who ordered Russia’s invasion on February 24, showed little sign of relenting.

In a televised speech, he sent a chilling warning to the West and oligarchs, telling “scum” traitors that Russians will “spit them out like a midge that flew into their mouths”.