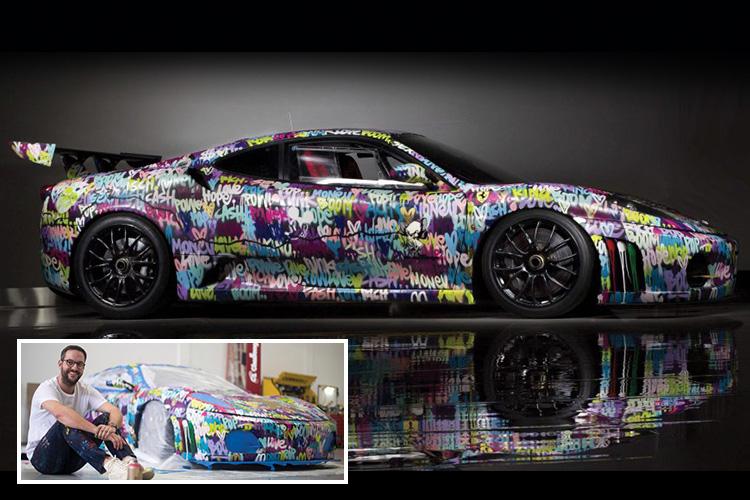 A UNIQUE Ferrari painted by a famous British artist has emerged for sale for a staggering £113,000.

The one-off 2008 F430 Challenge was decorated by London painter Ben Levy for Ansa Motorsports in Miami in 2015.

The 35-year-old spent three days in the American city working on the project and said his inspiration was to highlight corporate greed.

After eight years of being an artist, this was the first time Ben had ever decorated a car and he said the incredible value of the vehicle made it a nerve-racking experience.

Using spray cans, the graffiti specialist smothered the 483bhp supercar with a number of words and phrases including “cash”, “money” and “envy”.

This particular model is the track version making it slightly lighter than the standard F430 meaning its capable of a top speed of 202mph – 12mph faster than the basic model.

With such a blistering top speed, modified versions of the F430 were used as race cars and competed in the international GT2 class.

Capable of accelerating from 0-60mph in 3.6 seconds, the sportscars also competed in endurance races such as the 24 Hours of Le Mans.

From new, the Ferrari had a retail price of around £119,000, which means this graffiti-ed model is one of the most valuable of its kind despite its bizarre paint job.

The Ben Levy custom motor is now due to go under the hammer with RM Sothebys at their Fort Lauderdale sale on April 6. The auctioneers have given it a guide price between £84,000-£113,000.

After ceasing production almost 10 years ago, Ferrari replaced the sleek 430 with their 4.5-litre 458 Italia model.

The mid-engined sports car was produced by the Italian manufacturer until 2015 when it too was succeeded, this time by the turbocharged 488.