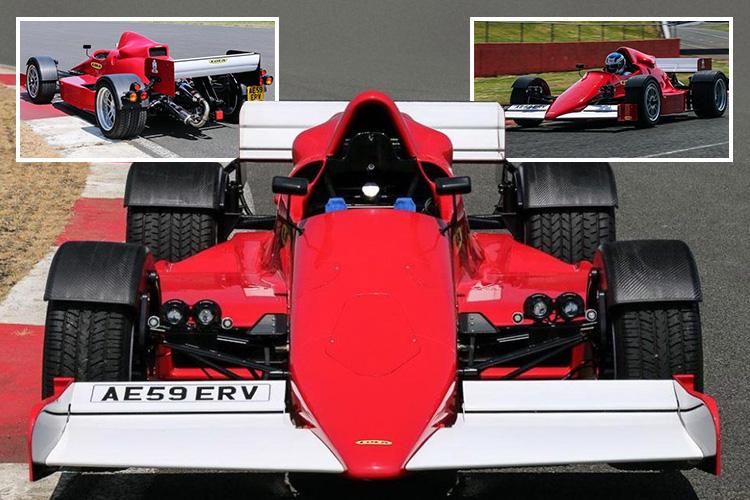 AN entirely road legal Formula 1-style car has sold at auction for over £50,000.

Likely the only one of its kind in the world, the Annison F1-R was completed in 2009 by Lola Cars of Cambridgeshire.

It was created by a team of British race engineers who were curious about whether it would be possible to build an F1-style car that could be UK road registered.

The F1-R was based off a 1996 Lola chassis, and also utilised new parts including the steering wheel, nose cone and body panels.

The racer is almost identical to a Grand Prix Formula 1 car, but comes with several subtle changes in order to help it suit the road.

The red motor is fitted with a handbrake to comply with UK regulations and has a smaller engine than the monsters seen on the track.

It’s fitted with a 2.0-litre turbo-charged Cosworth engine, which currently produces around 370bhp.

The vehicle’s ground height also had to be increased significantly and the car runs with an increased ride height which is adjustable between two and three inches.

The previous owner, who kept the car in storage for many years, reported that it was “good in traffic” and labelled it “very easy to drive”.

Aged in his 70s, he said he can drive the car with ease despite standing at close to six foot and weighing 14.5 stone.

Harry Whale, a classic car specialist at Silverstone Auctions, said: “It was very exciting to have this incredibly unique car at our sale.

“This is the only F1-R ever built and is fully road legal in the UK.

“The Annison was developed by the best race car engineers at Lola and its 370bhp engine make this the closest you can get to a Formula One car for the road.

“This special car will continue to have an exclusive presence wherever it goes in the capable hands of its new owner.”

The car was sold alongside a full history of all the parts used including receipts, engine builders spec, gear ratios etc, and many spares.