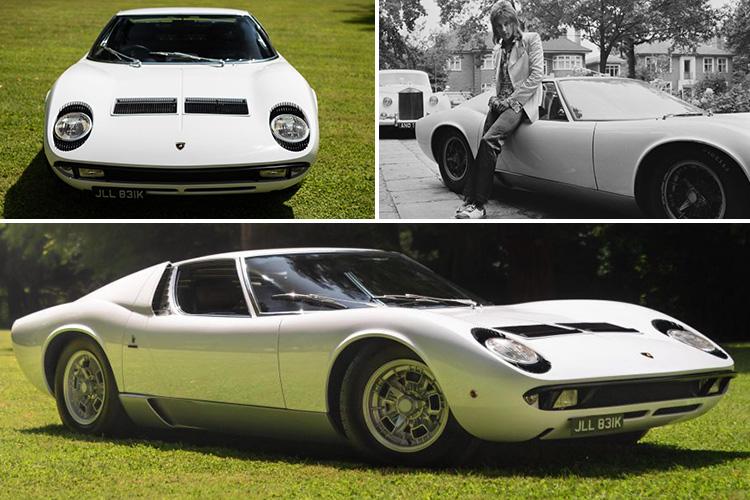 A VINTAGE Lamborghini once owned by Sir Rod Stewart has emerged for sale for an incredible £1.4million.

The Miura P400 S was purchased new by the rock star in 1971 and he owned it for several years.

After sold being sold on by the Brit musician, the Miura had a string of owners, remaining with the current holder for the last 20 years.

Despite its age, the coupe has covered just 28,834 miles on the clock.

It’s powered by an enormous V12 engine producing 360bhp, and has a top speed of around 170mph.

A known collector of high-performance cars, the Maggie May singer has owned several Lamborghinis in the past, including a 1991 Diablo Coupe and yellow Diablo VT roadster.

The car is being sold alongside an iconic image of Stewart’s then-girlfriend, model Dee Harrington, pictured with another Miura as well as this ‘S’ model on the singer’s driveway in Southgate, North London.

The flashy motor is now set to be sold by RM Sotheby’s Auctioneers on September 5.

The auction house has given the stunning Italian motor a guide price of between £1.2million and £1.4million.

William Smith, car specialist at RM Sotheby’s, said: “The Lamborghini Miura has a known ownership history from new, and the restoration work carried out by Lamborghini Polo Storico makes this example truly flawless.

“The Miura has been kept in such fine condition, it looks to this day just as it would have been delivered to Rod Stewart in the 1970s.”

Prior to the sale, the Miura is also set to compete at the Salon Privé Concours d’Elegance – a competition for the world’s finest cars –  at Blenheim Palace on August 30 to September 1.