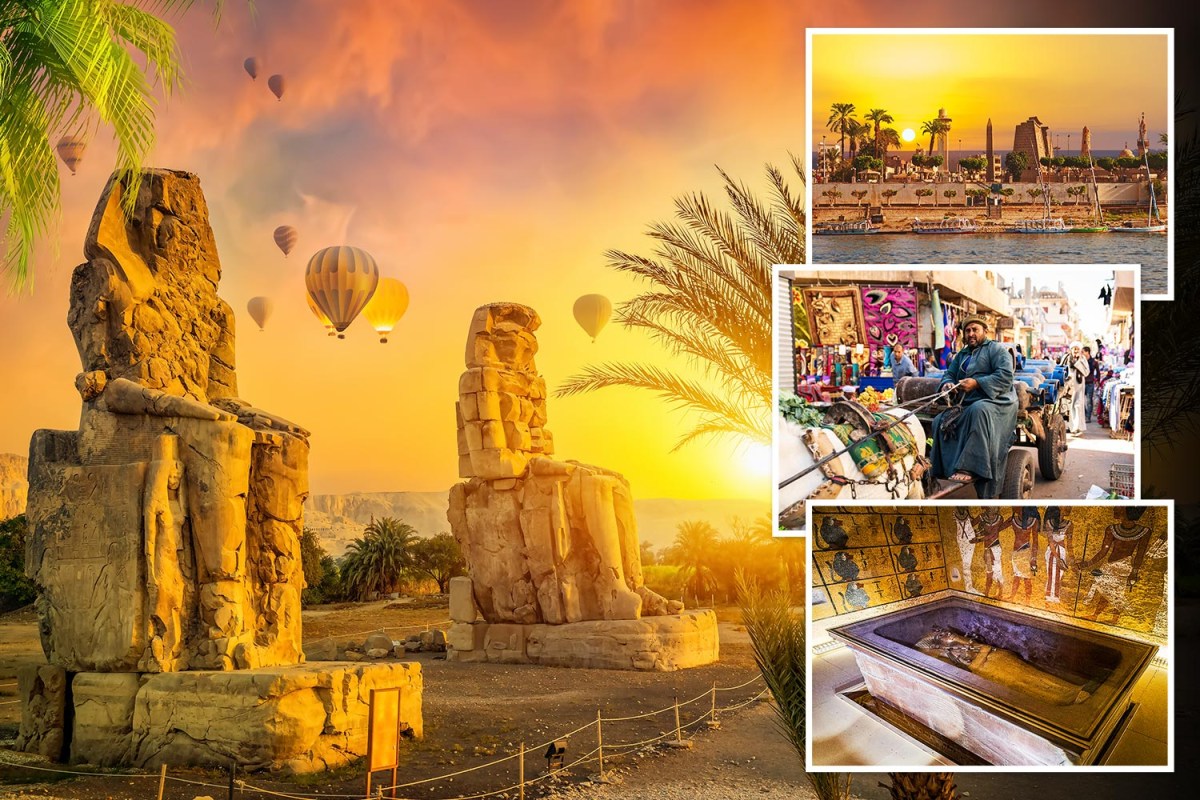 SLOWLY, the hot air balloon rises and my feet are effortlessly lifted one, two, three metres into the air.

My Egyptian guide on the ground grins mischievously up at us tourists drifting away. “See you tomorrow!” he calls, making us laugh nervously.

How do you get down from these things, again?

Thankfully, as the balloon climbs higher, my nerves are replaced with wonder at the incredible views of the desert below.

This isn’t my first visit to Egypt. My husband and I can’t get enough of its tombs, temples and jaw-dropping historical landmarks, along with the almost constant sunshine.

Plus, it is only a five-hour flight from London.

This time we have ventured to the ancient city of Luxor, which sits on the eastern bank of the River Nile. It is a four-hour drive from Hurghada airport but visitors are advised not to make the trip along the highway themselves at night. Hire a driver through your hotel to help navigate the security stops between regions during the day.

Luxor was the pharaohs’ capital from about the 16th century BC to 11th century BC — and their remains are now a massive draw for tourists.

One of the main attractions is Luxor Temple. Built by Amenhotep III in the 14th century BC, it is almost impossible to comprehend how these massive columns were made, all intricately decorated with hieroglyphics next to rows of sphinxes with goat heads. If you have been to Paris, you might recognise the lonely obelisk that sits at the front of the temple. Its sister statue was uprooted in the 1800s and now stands at one end of the Champs-Elysees.

From here we stroll along a 3,400-year-old road, known as the Avenue of the Sphinxes, which links Luxor Temple to Karnak Temple, the largest religious building ever made at about 200 acres.

I’m lost for words as we take in the huge columns and tiny details of this Unesco World Heritage Site.

On the opposite side of the bank, you’ll find the Valley of the Kings, where the mummies of pharaohs were buried with their jewels and supplies to get them through the afterlife.

Unfortunately, the riches of the pharaohs are long gone — taken by thieves or later by historians to sit in museums — but just thinking about the sheer effort that it must have taken to build these structures is still awe-inspiring. Meandering deeper and deeper into a tomb, each wall we pass is inscribed with prayers — all leading to a main chamber.

The highlight is Tutankhamun’s tomb, the discovery of which shot British archaeologist Howard Carter to fame. Unearthed in 1922, it was one of the rare spots thieves had not discovered, meaning its treasures were still intact.

Tutankhamun’s mummy also still lies there. He may not have made it to the afterlife believed in by Ancient Egyptians, but his name lives for ever, thanks to his tomb’s intricacies.

Luxor’s not all about tombs and mummies, though.

After strolling the orange paths and stony pillars, we decide to take in the sites from a new angle, on a hot air balloon ride.

Although it requires an early morning wake-up call, seeing the valley stretch out below you is something not to be missed.

Floating up and up, we stare out across vast golden sands, the 25C heat beating down us.

It’s hard to believe that all this lies just a five-hour flight away.