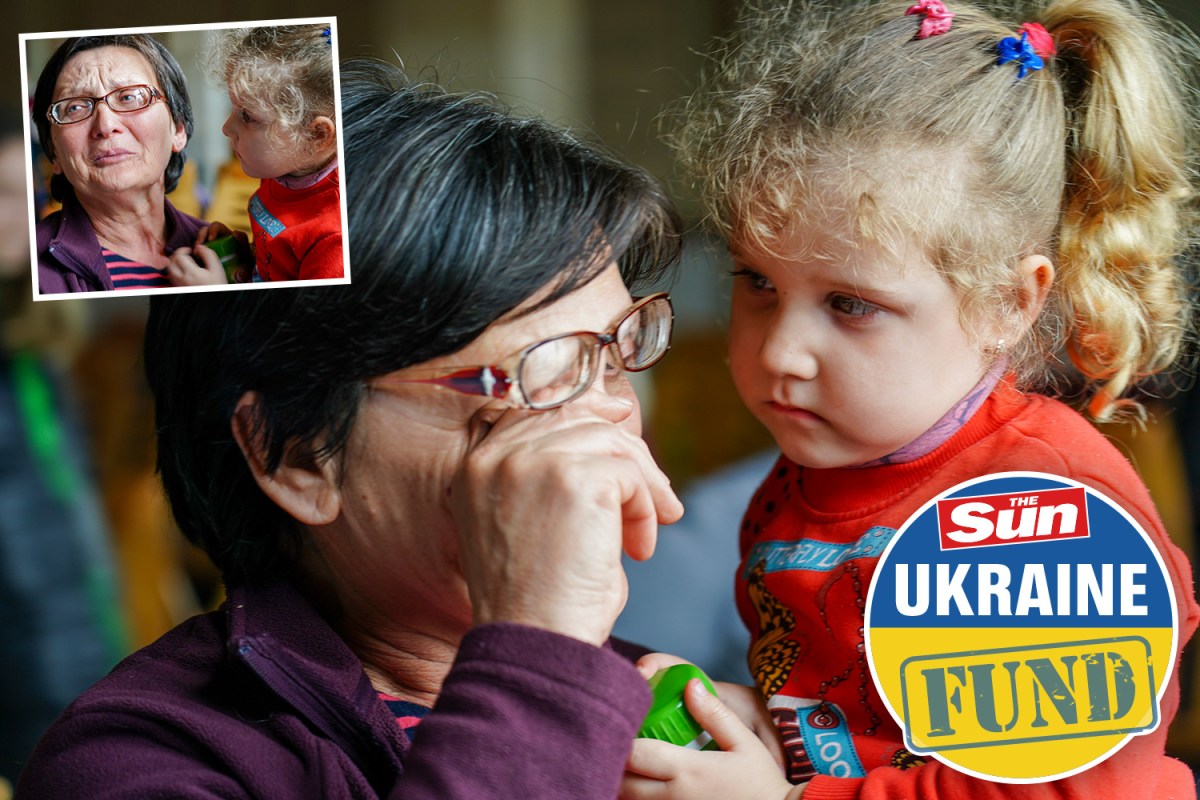 AGED just three, Anastasiya bravely tries to comfort her sobbing grand-mother after they were forced to flee for their lives in Ukraine.

Pitifully, the child hugs Oleksandra Yakovleva as the pensioner tells of a shattered life and gut-wrenching goodbyes.

Retired librarian Oleksandra, 57, said: “We waited for a new school for ten years then it was destroyed in a second. People were hiding in the basement when a rocket hit. They were buried under rubble.

“The headmaster was on the first floor and is now in a bad way. Others died. I was a librarian at the school for 26 years and had friends there. The day of the bombing, I was sheltering in a stadium. God blessed me.”

In a draughty arrivals hall at Ukraine’s Lviv station — a hub for refugees heading west — the pair are now being cared for by Red Cross volunteers.

The charity, backed by UK Times’s Ukraine Fund, offers food parcels, basic medicine and a warm place to recuperate. At least seven people were killed and three injured when the school in the village of Zelenyi Hai, near the southern Ukrainian city of Mykolayiv, was bombed early on Sunday. 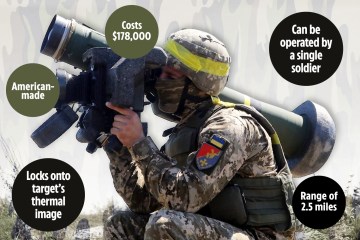 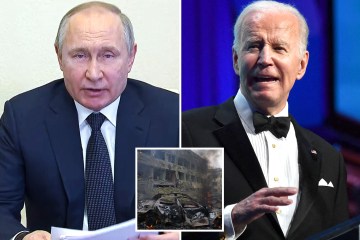 Weeping again, Oleksandra said of her village: “Everyone who could leave was evacuated. But my husband Sergiy, who is 62, has bad arthritis and was too infirm. Saying goodbye to him broke my heart. We are heading for Poland. I don’t know if I will see him again.”

Red Cross volunteer Anastasis Osidach, 17, hands little Anastasiya a carton of milk and offers words of comfort to her granny.

The Lviv medical student said: “It’s so painful to see little children upset. They don’t really know what’s going on but can see the pain in the adults’ faces.”

Asking Sun readers to dig deep and donate, she said: “There are so many kind people. Thank you for helping. But every day more trains come, bringing refugees.”

In just 21 days, more than three million Ukrainians have fled abroad in one of the biggest ever movements of people. In the same busy station waiting area is single mum and farmer Tatjana Homuch, 42, who was in the basement of the Zelenyi Hai school when it was struck.

Cradling her three-year-old daughter Allna, Tatjana said: “It was terrifying. The bomb made a direct hit on the school and turned it to dust. Everyone ran outside. I later heard the ­shockwaves from the bomb killed a family nearby.

“Luckily my daughter wasn’t there. I try to make this all seem like a game to her, to hide the reality. I hope she won’t remember the pain we’ve been through.”

As Red Cross workers handed out tea and blankets, Tatjana said: “The volunteers are so kind. It means so much to be treated like human beings. Thank you to everyone who has given money to help.”

Teeming Lviv station, in west Ukraine, is a choke point where hundreds of ­thou-sands are arriving by train to take buses to the nearby Polish border.

Weary women and children, in thick coats against the cold, have pale, drawn faces from their nerve-racking flight out of the conflict zone. Men aged 18 to 60 are largely absent — staying home to fight.

Children play tag amid the hordes of refugees queuing for sanctuary in the West. A table laden with paper and felt-tip pens is a diversion for some. Andrij Shunkarenko, six, proudly holds up his drawing of Ukraine’s flag. His mother Oksana Karvatska, 42, said: “I volunteered for the Red Cross and they asked me to make sandwiches. It’s a 24/7 effort, with hungry people arriving at all hours.”

There are 1.85million people still inside Ukraine who have been forced to flee their homes, according to the UN. This includes 200,000 here in Lviv — Ukraine’s seventh largest city — with the mayor saying the area has reached the limit of how many it can help.

Red Cross volunteer Oleksandr Barbash, 33, works at the station in the charity’s storage tent, which is piled with cereal, tins of soup, nappies and blankets. A sound engineer pre-war, he said: “Any donations to the Red Cross help cold and hungry people running for their lives.”

‘We give them hope’

Nearby, Red Cross aides marshal the destitute on to buses. Many of the refugees have never travelled abroad before and have little cash and few belongings.

Children’s doctor Svyatoslav Pavlikha, 32, has volunteered for the Red Cross. After lifting a pram on to a bus, he said: “It’s difficult to watch our women and children forced to leave. Some are crying. I can work with the children on an emotional level in the short time I’m with them.”

“The chaotic scenes I witnessed here last week have been replaced by orderly queues and admirable patience from those who have been through so much.”

A builder in peacetime, Red Cross volunteer Oleksandr Petrenko, 38, hauls wheelchairs, cases and tired children on to the buses. He said: “We have to be part station porter and part social worker.

“The Red Cross gives the refugees food for their journey, and basic medical help.

“We also give them hope that everything will be OK and that life will carry on.”