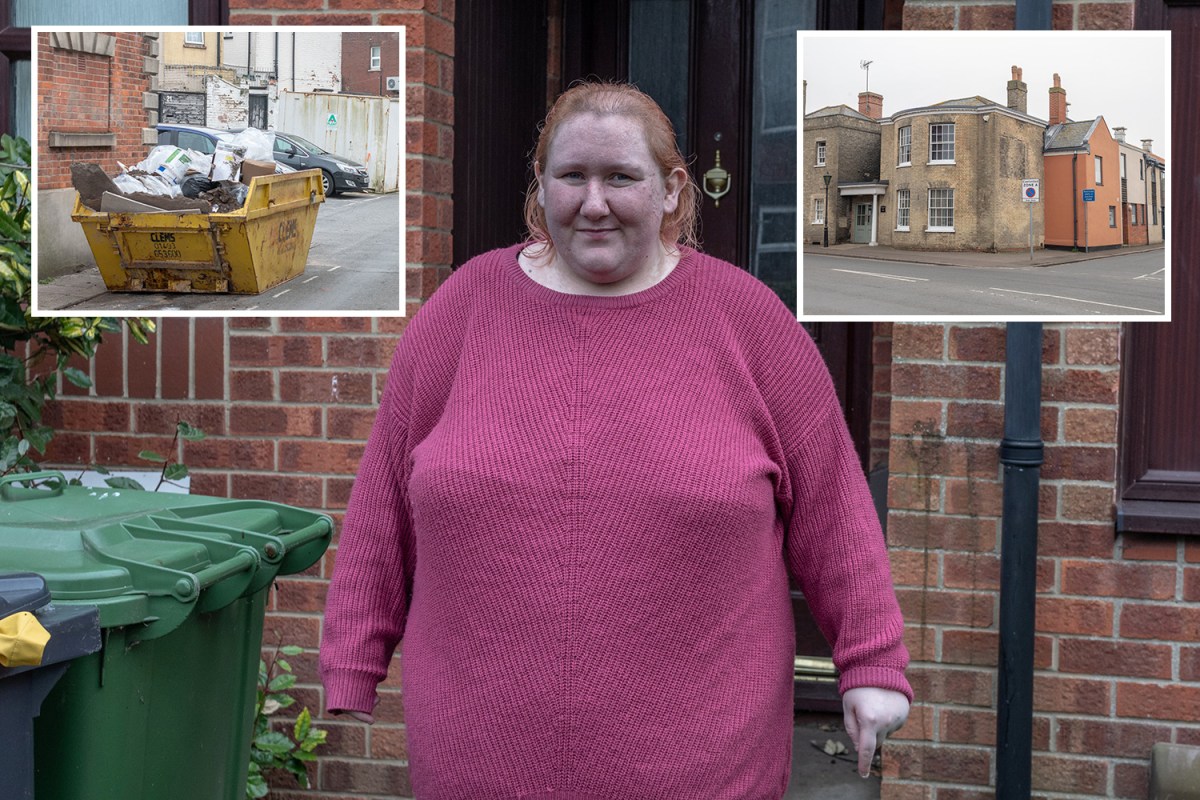 RESIDENTS of a crime-ridden street have told how they are being tormented by gangs of up to 30 pre-teens who do drugs, poo in their gardens and bombard their homes.

Victoria Eccleston, 29, who has learning difficulties, said that she has had to lock herself inside and feels like she is living in a “prison”.

She is one of several residents on the litter-strewn Manby Road in Great Yarmouth, where cops have stepped up patrols due to daytime drug deals and violence.

Speaking at her front door stained by yolk from a recent egging incident, Victoria said that she was “living in terror” on the street which is a five minutes walk from the town’s popular seafront.

Victoria said that a gang of around a dozen youths living locally, believed to be aged 10 to 14, were responsible for the torment.

Victoria, who has lived there for 12 years, said: “I’m fed up with all the harassment. The kids see me in the street and call me piggy, froggy, and oink.

Victoria’s brother Michael, 28, a carer, said that they had started taking a longer walk into the town to avoid running into the gang.

He said: “Some days it can be terrifying. You never know when they’re going to knock on the door. It makes us fear for our safety.

“They opened the door before so we have to keep it chained and locked whenever we’re in. It can feel like a prison sometimes.”

Michael added: “The police can’t do anything unless we get pictures of them. By the time police come they run away.

“Because of all the back alleys they can just scarper and vanish.”

The narrow street, which sits opposite a Sainsbury’s supermarket, features a row of around 16 terraced houses with netted curtains.

It is set in a sprawling network of alleyways, which locals say that yobs use to deal drugs and evade police.

Drug taking in broad daylight is said to be common and some residents showed syringes and small plastic bags that had been dumped in their gardens.

One resident, Patience Nxumalo, 47, said that some of the local yobs had pooed outside her home, where she lives with kids Ella, 11, Lwandile, four, and husband Than, 52.

Speaking as seagulls cawed overhead, Patience said: “I’m worried about my daughter if she sees people passing drugs around here.

“They sit outside my house at night and leave drugs bags and syringes. I have to put on gloves to get rid of the syringes. It’s dangerous for my son.

“Sometimes they have even defecated in my garden. I’m thinking ‘how do you do that in someone’s yard?’

‘ATTACKED’ WALKING TO THE SHOP

Patience, who is from Zimbabwe and has lived at the end-of-terrace property for 16 years, pointed to graffiti of the N-word daubed on a wall next to her house.

She said that she did not know if the word was targeted but that they were the only black family on the street.

Another mum, Alex Brackley, aged 46, said that she and her son Leyton, 15, were planning to leave the area after she was attacked outside her house.

Alex, who uses crutches due to a disability, said: “I was attacked when walking to the shop. Some guy pushed me over asking for money and obviously I didn’t have any.

“The police are so useless around here so even when I got attacked I didn’t call them. I’ve bought mace that I now keep in my pocket.”

“I don’t leave the house at night now. I try to only go out if I’m with Leyton.”

Alex said that when they first moved in 11 years ago a group of thugs tried to break in as the previous tenant apparently owed them drug money.

Their house is a stone’s throw from Stanley Terrace, a residential street where a 17-year-old girl stabbed her neighbour to death in 2011 over a reported noise dispute.

Talking on her doorstep, Alex added: “It’s not good around here. We openly see people dealing outside our door.

“We came out one day and didn’t even say anything, one of the lads looked at me and said ‘what the f*** are you looking at?’

“You’ll see 25 to 30 people in the daytime drinking and dealing drugs. We’ve seen it go downhill over the last few years.

“We used to let our kids play out the back, it was lovely, especially during the summer. We can’t do that now because we don’t want our kids seeing it. We’ve found needles out there and they smash their beer bottles.

“When I have my family to visit I feel terrible. What they must think I don’t know.”

“The police don’t do anything about it. They know damn well what happens around here but it seems like they want to keep it hush-hush and turn a blind eye to it.

“That’s why the gatherings are getting even bigger. The last time we saw the place was when they knocked last month to ask about what was happening. Before that, never.”

Robert Beresford, 67, has lived on the street for two decades and said that he believed some people loitering in the area were from a supported accommodation block at the end of the road.

He said: “A lot of them stay there, it’s a halfway house.

“I must admit that lately I haven’t seen as many guys dealing drugs around here since the police said they had stepped up patrols.”