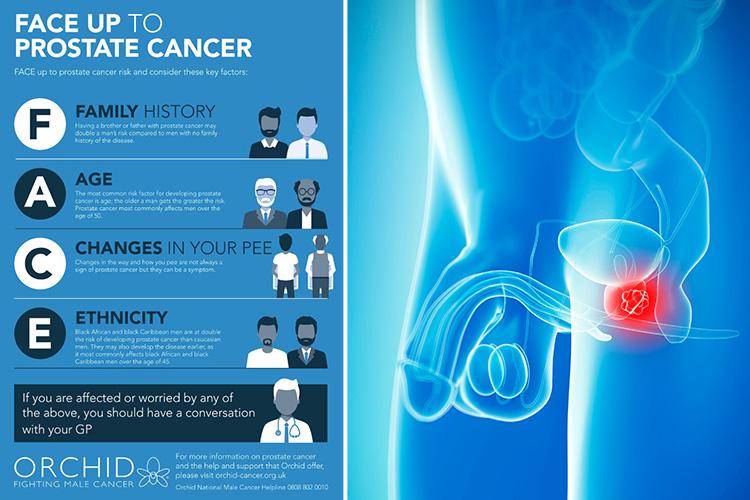 IT’S a cancer that affects thousands of men in the UK every year, and one that not many people know the signs of.

Prostate cancer is the most common form of cancer in British men and the number of people being diagnosed with the cancer has increased in recent years.

What is prostate cancer?

In January 2020 it was revealed that prostate cancer had become the most commonly diagnosed cancer in the UK and that’s though to be due, partly to the fact that more men have been having PSA tests.

The prostate is a small, walnut-sized gland, that only men have.

It sits around the urethra – the tube a bloke pees and ejaculates from – between the penis and the bladder.

The main point of the prostate is to produce the fluid which mixes with sperm to create semen – making it pretty vital for reproduction.

But, like all organs in the body, it can be invaded by cancer – when cells in the gland start to grow uncontrollably.

One in eight British men will get prostate cancer in their lifetime.

Many will live long lives and not experience too many nasty symptoms.

But in others, their cancer will spread, which is when the disease can turn deadly.

Prostate cancer currently kills over 9,000 men a year, with one man dying every hour from the cancer in England.

Worryingly the majority of men don’t know anything about the disease and, of those that do have a shred of a clue, 60 percent aren’t confident naming the signs and symptoms, according to a male cancer charity, Orchid.

A survey by Prostate Cancer UK previously revealed men over 45 knew the least about the killer disease and more than half of black African and Caribbean men did not know their ethnicity increased their risk.

“If we can tackle this from both sides, by getting many more men and GPs to talk about prostate cancer risk, we can help to improve outcomes in the longer term – both for patients and the health service.”

What are the symptoms every man needs to know?

In most cases, prostate cancer doesn’t have any symptoms until the growth is big enough to put pressure on the urethra – that tube you pee through.

Many men’s prostates get larger as they age because of the non-cancerous conditions, prostate enlargement, and benign prostatic hyperplasia.

In fact, these two conditions are more common than prostate cancer – but that doesn’t mean the symptoms should be ignored.

The signs that cancer has SPREAD include bone, back, or testicular pain, loss of appetite, and unexplained weight loss.

Prostate cancer is very common, and the causes are largely unknown.

Most cases occur in men aged 50 or over, while prostate cancer is more common in men of African or Caribbean descent, and less common in Asian guys.

There’s also a familial link, so having a dad or brother who had prostate cancer increases your risk.

A high-calcium diet is also thought to increase your risk while eating cooked tomatoes and Brazil nuts could lower it, but more research is needed into the effect of diet.

And research conducted in Australia suggests drinking just two pints of beer a day increases man’s risk by a QUARTER.

How is prostate cancer treated?

Assuming prostate cancer is caught in its early stages, treatment is not normally immediately necessary.

In these cases, doctors have a policy of “watchful waiting”.

One man was cured after being given testosterone in an experimental trial designed to shock tumours to death.

Nearly all prostate cancer treatments come with the unwanted side effects of erectile dysfunction and urinary incontinence, which is why many men choose to delay treatment.

The only exception is non-surgical laser treatment, which doesn’t cause impotence – but is still in its trial stages.

If the cancer has already spread, it cannot be treated, and medical help is focused on prolonging life and relieving symptoms.