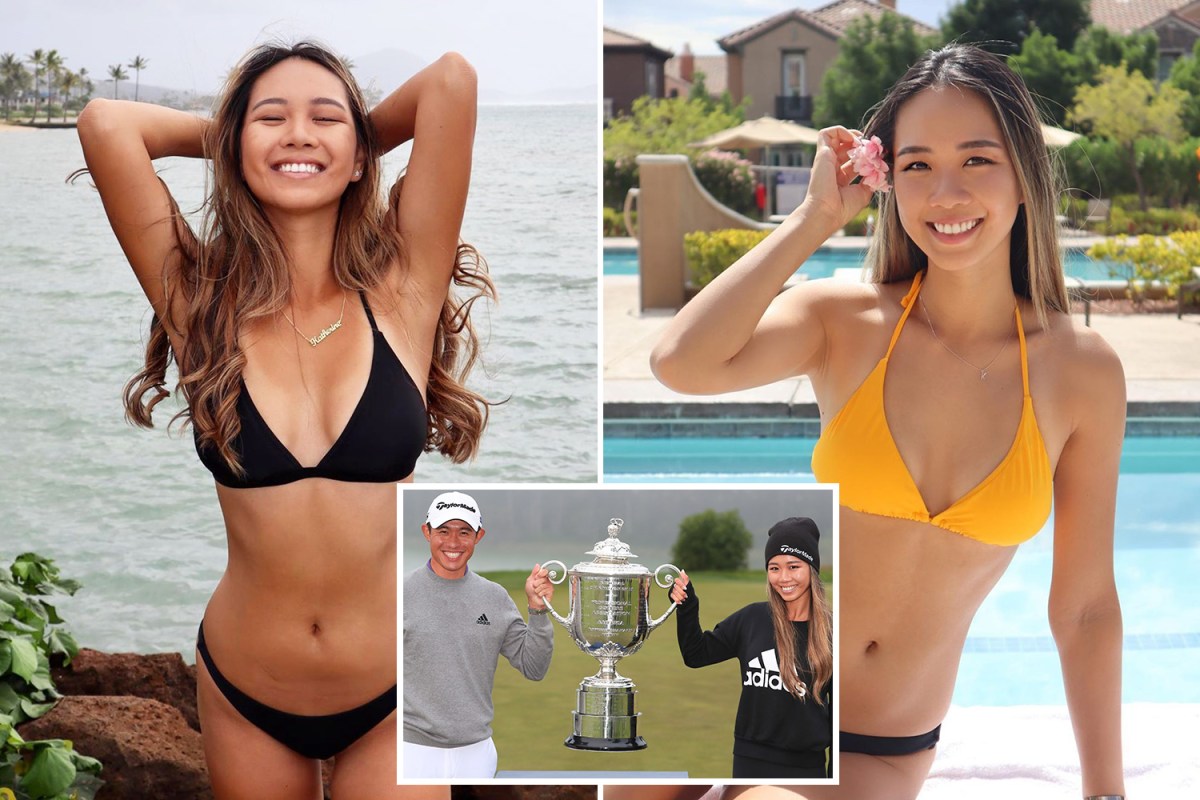 COLLIN MORIKAWA is one of the USA’s very best golfers.

The 2021 Open champion is a rising star after picking up his second major at Sandwich in July at the age of just 24.

And one of the first people to congratulate him was girlfriend Katherine Zhu.

She wrote on Instagram: “So incredibly proud of you! You’ve accomplished so much since turning pro in 2019 and I really can’t wait to see what’s next.”

Five months later, in December 2021, they got engaged, and announced it on Instagram.

Morikawa wrote: “My forever and ever, I love you,” next to a photo of Katherine wearing a big ring.

And it was through college golf, with Morikawa at California, that the couple met and hit it off.

Vancouver-born sensation Katherine loves her man and the sport so much she is often spotted on the PGA Tour caddying for him during competitions.

“Most importantly, golf has created opportunities that have made lifelong memories that I’ll cherish forever. I’m so grateful for this amazing game.”

In a video for the PGA Tour earlier last year, the pair gave a bit of a background to their relationship.

Morikawa said: “We met in college and just clicked. It’s crazy because I won my first college tournament that next week and we’ve done pretty good since – it’s really fun.

Zhu admitted their relationship is “very competitive” when they hit the course together with Morikawa adding: “Always, we never let each other win.

“I think she beats me on probably 70 per cent of our chipping competitions. It actually makes me a better player. What’s great about her is that we’re always competing.

“To have her around [on the PGA Tour] on off weeks when no one’s around, she can always bring a wedge to the course and we can always do something fun.”

Away from golf, Zhu attended high school at Zhuji Hailiang Private High School in China before returning to North America for her degree in international management.

The golfing power couple started dating in April 2017, with both sharing three-year anniversary posts on Instagram to mark the occasion last year.

Morikawa posted their first photo together on social media the following month and joked: “Probably not a good idea to take your date to a rooftop when she’s afraid of heights.”

And they don’t mind keeping their blossoming relationship in the public eye, especially with Zhu’s massive following.

The brunette has racked up 48,500 Instagram followers already – but that is set to keep rising, especially as she delights fans with her stunning bikini pics and gorgeous selfies.

And when she is not hitting golf balls or smiling for the camera, judging from her Insta Zhu is spending most of her time either baking treats or looking after dogs after becoming a short-term foster owner this year.

Like any happy couple, Morikawa and Zhu love going on dates.

Whether that be exploring cities where he is playing tournaments, adventuring in the countryside, wining and dining at plush restaurants or, their personal favourite, a day at the beach.

So while Zhu made the most of the PGA Championship being played in San Fransisco to fit in a trip to the Golden Gate Bridge, she ensured she was back at the course as her boyfriend swept aside the competition to land the title at the first time of asking with a final-round 64.

Coronavirus rules led to a slightly awkward high-five celebration at first before a big hug.

And after Morikawa had dropped the lid off the Wanamaker Trophy, Zhu joined him to pose with it together.