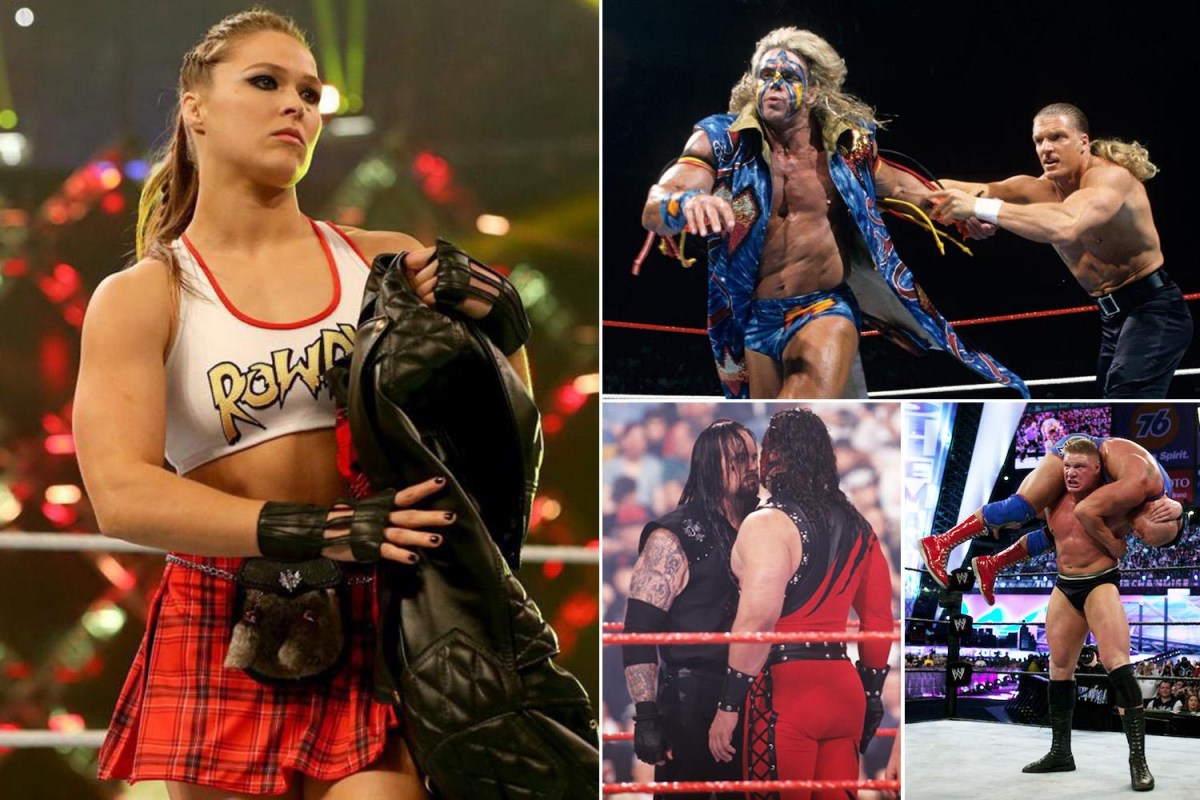 RUMOURS continue to mount that Cody Rhodes will be returning to re-debut for WWE at WrestleMania 38 – and he will not be the first mega star to enjoy a huge introduction on the Grandest Stage Of All.

Ronda Rousey made a brilliant WWE debut back at WrestleMania 34 – stealing the show in her tag match with Kurt Angle against Triple H and Stephanie McMahon.

Now speculation continues to swirl around the net that Rhodes will be debuting again for WWE at the Showcase of the Immortals next month.

The former All Elite Wrestling star knows full well that a successful wrestling run can be made or broken by a great first outing at WrestleMania.

So here are five of the greatest first matches at the Show of Shows – matches that set up top superstars for incredible careers.

Plus, four of the absolute worst Mania debuts – matches that could have killed careers before they got started.

Undertaker’s younger brother made his Mania debut against the Deadman himself – the payoff to the near-yearlong storyline that introduced Kane.

It wasn’t that good a match (a sluggish big man collision) and Kane lost – pinned after three Tombstones – but it still a superstar-making moment that put him over massively with fans.

Kane sprung up after the pinfall and nailed Taker with a Tombstone of his own (Tombstoning real-life baseball villain Pete Rose before the match also helped).

By June he had won the WWE Championship and spent the next 18 months developing as one of the most interesting, layered, and nuanced characters of the Attitude Era. Not bad for a masked giant with no vocal chords.

Angle also lost in his Mania debut. Not only that, but – as a double champion at the time – he lost both his Intercontinental and European Championships. But it was masterfully done.

Facing Chris Jericho and Chris Benoit in a fun two-fall triple threat match, Kurt lost both belts without being pinned or tapped.

It perfectly suited Kurt’s steady push up the ranks. He was able to keep his near-perfect record and could do some heel-ish complaining over the injustice of it all.

Kurt had only made his debut five months earlier. By SummerSlam he was challenging for the world title and by the end of the year he was champ.

Cena reportedly had a rap battle lined up then nixed for Mania XIX – so had to wait until the following year to get his WrestleMania moment.

He faced Big Show for the US title and lifted the 500-pounder up for an Attitude Adjustment (then called the FU), not once but twice.

Cena was over as a babyface and the ovation he got for lifting and defeating Show – in Madison Square Garden, no less – cemented his spot as a future main eventer.

At Mania the following year he won the WWE Championship for the first time.

He had been part of a heel team with Jack Swagger but fans were getting behind Cesaro (partially thanks to his crowd-popping swing) and were ready to turn him babyface.

On the pre-show, he turned against Swagger and went on to win the first ever Andre the Giant Memorial Battle Royal (back when fans thought it meant something).

Cesaro last eliminated Big Show by lifting him over the top rope to a thunderous reaction.

Lifting Big Show is obviously a surefire way to get yourself over at WrestleMania.

OK, we’re cheating here – this is three superstars, not one – but all three women had a blinder in their show-stealing triple threat match at Mania 32.

It was historically significant too. This was the match where WWE ditched the ‘Divas’ name and rebranded the title as the Women’s Championship.

But it’s also the moment the Women’s Evolution was properly kick-started on the main roster.

Charlotte (who won the match) and Sasha went on to have the hottest feud on Raw for the rest of 2016 and Becky became the first SmackDown Women’s Champion.

AND FOUR OF THE WORST…

Poor Yoko had an absolute stinker in his WWE Championship match against Bret Hart at the notoriously bad Mania IX.

The sumo (actually Samoan) 500-pounder earned his shot at Bret’s title by winning the Royal Rumble – and actually defeated Bret at Mania with a crafty salt in the eyes-leg drop combo.

But that wasn’t the end of it.

Hulk Hogan then rushed help his ‘friend’ Bret Hart and was challenged to an impromptu match by Yoko’s manager Mr Fuji.

Trips – then playing the blueblood gimmick Hunter Hearst Helmsley – had a decent mid-card push when he came into WWE in 1995.

But it came to a crashing halt at his first Mania when he faced returning lunatic legend, Ultimate Warrior.

Warrior charged through Trips in under two minutes and hilariously no-sold the Pedigree.

Trips said years later that Warrior was unprofessional and had the match changed at the last minute.

But they had bear-hugged and made up by the time of Warrior’s next return in 2014, when he entered the Hall of Fame.

Show had joined WWE the month before and was facing off against Mankind.

The winner would go on guest ref in the Stone Cold v Rock main event.

It was a quick, worthless match, and Show lost.

It was a rushed turn that killed Show’s momentum after less than two months in the company.

It also set a trend for the 7-footer – never-ending babyface and heel turns that fans cared less about each time before his departure to AEW.

It seems harsh to call Brock’s Mania debut a failure – he won the WWE Championship in the main event, after all – but there’s one thing fans remember: his botched shooting star press.

The match – Brock v Kurt Angle – was also a disappointment, thanks to Kurt’s limiting neck injuries and the concussion Brock gave himself by landing on his head.

There’s lots of speculation about who suggested Lesnar do the move (which he’d performed successfully before) but it turned into a WrestleMania moment from hell.

Brock wouldn’t have a classic match on the Grandest Stage until 12 years later at WrestleMania 31 – his first battle with Roman Reigns.