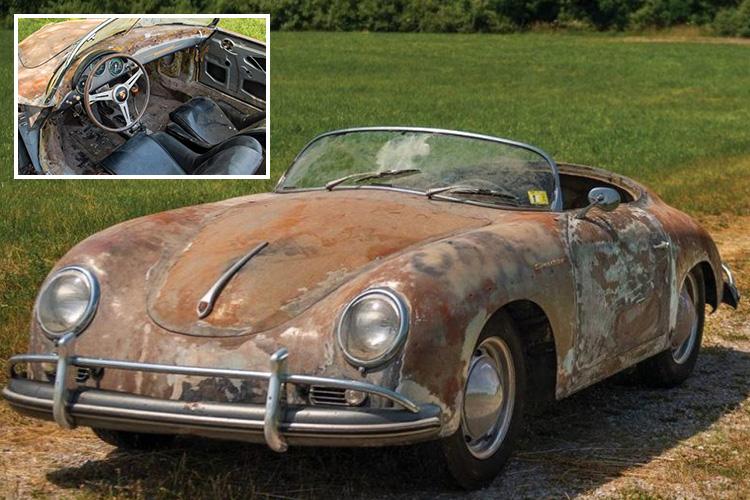 A RUST-BUCKET Porsche hidden away for decades has emerged for sale – and you won’t believe how much it’s worth.

The 1958 1600 Super Speedster has been kept in storage since 1983, leaving it covered in rust and in total disrepair.

Being auctioned off by RM Sothebys, the motor is being pitched as a “prime example for restoration”.

Originally built for the American market, the car is one of a select group to be made with a speedometer reading in miles rather than kilometres, and U.S-specification bumpers.

Given the car’s current condition, its original colour is not listed, but a door stamp claims it once boasted a metallic silver finish.

Though its early history is not known, the current owner purchased the motor in 1983 as a restoration project.

But after sanding off the majority of the paint, they placed the car in storage in Dallas, Texas, where it would remain for more than three decades.

And the car has been off-road for so long it still boasts its 1983 Texas licence tag.

The Speedster is mostly complete, but requires some serious work to get it back on the road.

According to the seller, “its next owner can expect to replace any sheet metal in the usual areas, including floor pans, trunk floor, and battery box”.

The car is thought to have covered just under 70,500 miles across its lifetime, but the current replacement odometer reads around 8,200 miles.

Now 60 years old, the rusted motor will go under the hammer at RM Sotheby’s Porsche 70th Anniversary Auction on October 27 in Atalanta, Georgia.

The sale will feature over 100 Porsche motors from across the brand’s history, with some tipped to sell for millions of pounds.